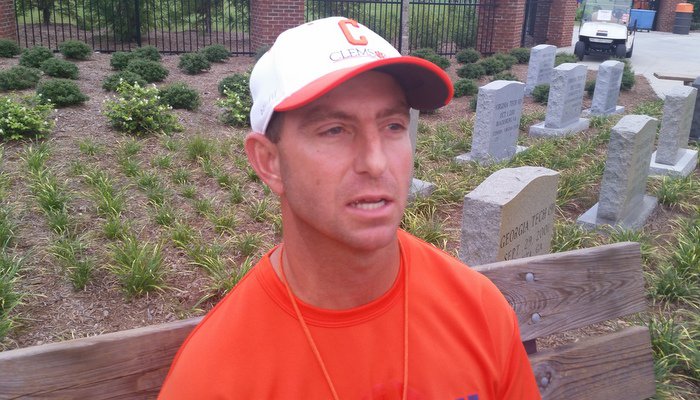 Roderick Byers
RS Jr. Defensive End
#55 6-3, 284
Rock Hill, SC
View Full Profile was moving to the other side of the ball.

Byers, a redshirt junior out of Rock Hill, has played in three games and logged 31 snaps this season, recording four tackles.

The Tigers lost two offensive linemen to either injury or illness last week, and while Byers won’t be able to help in a game just yet, Swinney said it will help in the long run.

“Some breaking news, we moved Rod Byers to o-line. He doesn't know a whole lot,” Swinney said after Wednesday’s practice. “Athletically, on the hoof, I think it's a great move. It's a move I wish we would've made earlier. He wasn't really fired up about doing it but I think he's taking advantage of his opportunity now. I think it's a move that will really pay off for us as we move through this season and also into next year. We've got him in number 70 out there.”

Swinney said the move makes sense because Byers isn’t a stranger to the offensive line.

“He's played some offensive line. He primarily played defensive line but he's not like Tyler Shatley

“We've had three different quarterbacks because Coach V [Brent Venables] got in there today and ran two periods at quarterback,” Swinney said. “He wanted to sling it around and run it at his tempo. I'm not sure how much it prepares us with Coach V working at quarterback but there was a high sense of urgency.”

Tony Steward
Sr. Linebacker
#7 6-1, 236
Hastings, FL
View Full Profile is much better but it's just Wednesday. He's not ready to play today. If he can continue to make the type of progress that he's making, hopefully he'll be ready. Boulware has looked good in practice and so has Kellen Jones

Charone Peake
RS Jr. Wide Receiver
#19 6-3, 204
Moore, SC
View Full Profile is still limited right now and is sore from a shot he got on Sunday. He's still a little sore from that. Cole Stoudt

“That's why we started him last week. Our confidence has grown in him as we've seen his confidence grow in what he's doing. He did a nice job last week and that's something we hope to build on.”

“We did not play him last week. Just team rules. We sat him but he's back at it this week. It was just team rules and every now and then you have to get their attention a little bit.”

On his participation in the Pharrell Williams “Happy” video

“I did that this summer. They just now released that? I didn't know the first line. They had to teach me the first line. I just knew 'a room without a roof' and I knew 'happy, happy, happy.' That was something we did this summer for the Alumni Association. Pharrell ain't got nothing on me. I didn't even know who Pharrell was until our bowl game. That's how sad that is. We stayed at the Fountain Bleu and he was performing and everybody was talking about Pharrell and I'm like, 'Who's Pharrell?' Literally like a month later, that song hits and I'm like, 'Hey, I know that guy!'”