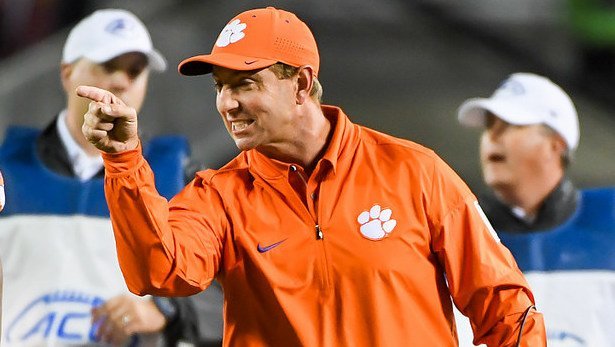 Swinney says he knows Clemson fans will show up Saturday

CLEMSON – The forecast for Saturday’s season opener is heat followed by more heat, but head coach Dabo Swinney isn’t worried about the fans showing up.

Clemson takes on Furman Saturday at 12:20 pm and Swinney met with the media after Wednesday’s practice for his last availability before the game. He said he knows the heat won’t deter Clemson fans.

“Show up. You get seven Saturdays a year. It doesn’t matter what the matter is. I’m not worried about that though, they’ll be there,” Swinney said. “It’s been hot the several days. It’s been really, really hot. The guys have done a nice job and we’re in good shape. We’re ready to go.”

The Tigers are healthy heading into the opener.

The big news of the night centered on linebacker James Skalski – Swinney said the coaches hope to redshirt Skalski this season and he will have two years of eligibility remaining.

“He’s been great. We’re actually going to try and hold Skalski. We’re going to try and see if we can steal a year back from him,” Swinney said. “The redshirt rule, now we have options. There might be somebody on your roster that you might try to steal a year back. He’s excited about it. That’s a product of number one, we love our people at backer. We feel great about our depth and functionality at backer. If we have some injuries or something, all bets are off, but if anything stays status quo, we get the best of both worlds because we can hold and still play him four games. We can pick those games where we have a great player available and then get him back for two years.

“He was hurt and missed some camp so we started kicking it around. He’s excited about it. He’s open to it. I think it’s a win on all fronts if we can do it. It’s kind of like we did with Garrett (Williams) last year. We were back and forth and we finally reached a point where it was, ‘Ok, we’re going to hold him,’ and it’s just paid off. We see the same opportunity with Skalski if nothing changes, we stay healthy and those type of things. We’ll pick the games where we know he’ll be available and go from there.”

Swinney said the coaches have used the tactic in the past.

“We’ve done it with several people along the way. We did it with Charone Peake. Back in the day, you didn’t have many options,” Swinney said. “People talk about the freshmen but even with them you’ve got to have the right opportunity to get them in there because you’re not going to play a freshman over a guy who’s going to play all year for you just to play them. It gives you flexibility and then it gives you flexibility on your roster if you have a guy that you can steal a year back.

“He can be a starter for us right now. He’s a great football player. We have the flexibility and our roster allows us that opportunity and we think it’s a win-win. It’s something we talked to him about. Brent (Venables) actually approached early on it. We’ll see what happens.”