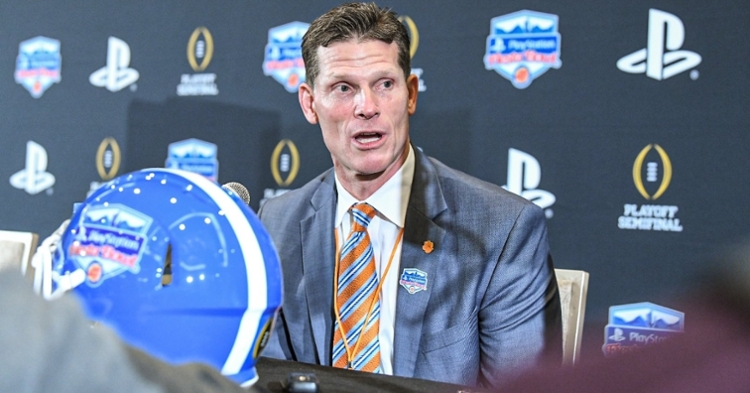 Venables has been offered other jobs but feels valued at Clemson.

Clemson head coach Dabo Swinney has a mantra that he lives by that says, “bloom where you are planted.” Defensive coordinator Brent Venables lives that every day, but especially so when other schools come calling for his services.

The Tigers’ ninth-year coach is rumored to be in line for various jobs around the country every December, and this year is no exception. When Auburn’s Gus Malzahn was let go Sunday, Venables’ named popped up on some of the lists of potential replacements.

Venables told the media Monday that with Clemson preparing to take on Notre Dame in Saturday’s ACC Championship Game, he doesn’t have time to bother with looking around for another gig.

“You are so busy, to be honest, that you don’t really sit around and have a game plan for that,” Venables said. “We have a great situation for our team right now. Again, what is in front of us is where all the focus is right now.”

Venables said that his focus starts with being comfortable in Clemson and simply appreciating the things he has rather than looking elsewhere.

“I think it starts first with having an appreciation for what you do have,” Venables said. “The people that you work with, the players that you coach, where you live, where you coach, the opportunity to win. Certainly, I am well compensated, but it is a lot more than that for me. It is being in a place where you are valued, and you feel like you are bringing something to the table.

In other words, Clemson is a special place that is going through a special time in the program’s history, and he realizes that.

“That gives me clarity that way and maybe if I was in a cesspool or somewhere that was a hot mess, maybe that is different,” he said. “But I do value where I am at and who I am with and, again, what we are doing at Clemson. It is a special place.”

On the health of James Skalski

"I don't know if he's 100 percent. I don't ask that question. Sometimes you have to be careful not to ask questions you don't want to hear the answer to. I live in a positive world. He's practicing today. He's very ambitious getting back as early as he did. Just a wonderful job our training staff has done with him, and certainly Jamie having a huge passion is a credit to him. We feel like he's going to be close to, if not, 100 percent."

"I thought they did a great job. We've got to do better. We've got to win 1-on-1s. They're good. And they're in this position because as we always say, it starts up front. They're seasoned, strong, experienced, and they did a better job than we did that way. I felt like we disrupted them to a certain degree but we didn't finish a lot of plays, whether that is beating the guy one-on-one... when you have your limited opportunities, you've got to make plays getting guys down, collapsing the pocket, staying in front of the quarterback, all of those things. But I thought it was a real credit to them. They blocked us. We weren't good enough."

"Absolutely. You learn under fire. Really proud of those guys even in defeat. So many guys, like Trenton Simpson played 75 snaps. Jake (Venables) played 78 snaps. Baylon Spector played close to 80 and that's not even including special teams those guys played. They learned a lot about themselves and we learned a lot about us and where we've got to get better. So some of it is a humbling learning experience. But no doubt those guys learned the margin for error, the physicality, the precision you have to bring in both the run and pass.

“It's a big deal, man. You play championship football, you have to be able to match blow for blow in order to have a chance in the game. Those guys have gotten better. Sometimes that's not real obvious until you have time to stop, go back through cut-ups once the season is over. But markedly you'd be able to see improvement from a number of players. We've had 23 players start on defense this season, the most we've ever had. There's no doubt they learned a lot about themselves and where they are a little bit short and where they need to get better. We've worked hard doing exactly that."