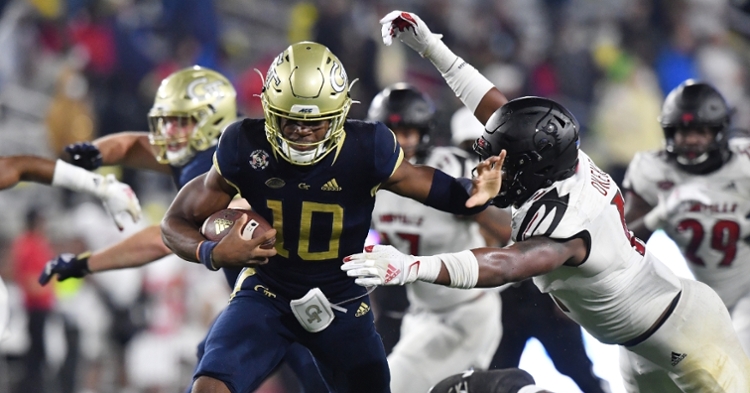 Georgia Tech enters Saturday’s contest with top-ranked Clemson with a lot of confidence and an offense that is starting to find its stride behind freshman quarterback Jeff Sims. Clemson defensive coordinator Brent Venables says the Yellow Jackets are on a different planet than they were a year ago.

Georgia Tech (2-2) is ranked 20th nationally in total offense, led by Sims, who is 65-119 (54.6%) for 944 yards, five touchdowns and eight interceptions. Sims was named ACC Rookie of the Week for the second time this season after throwing for 249 yards, rushing for 64 and accounting for three touchdowns in last Friday’s win over Louisville.

He is the only quarterback in the nation who has passed for at least 240 yards and run for 60 yards or more in three games this season. The feat has been accomplished only 12 times total across NCAA Division I FBS this season and Sims is the only freshman (true or redshirt) who has achieved it even once.

"I think with the talent they had there already at receiver in particular, and with Jeff Sims and No. 21 [Jahmyr Gibbs] and No. 22 [Jamious Griffin] at running back, they're much different. They use a spread, run-game RPO, use the backs really well, and get the backs out in space. Quarterback is a really good decision-maker. Going to be a special player when it's all said and done. The receivers are on another planet from a year ago. The offensive line is playing tough and physical. They imposed their will vs. Louisville, especially in the fourth quarter. When they needed to make some plays, they just physically dominated Louisville."

Venables especially likes what he sees out of Sims and Gibbs.

"They're special. They're different. What's the retired running back in Seattle? Marshawn Lynch, he got just that juice to him,” Venables said. “Inside, outside, breaks tackles man, plays with passion and a real presence. You don't see it a whole lot but you know it when you see it. Certainly know it when you don't. Just has a got presence to him. Really special player. Great lateral speed, can make you miss in the hole. Excellent ball skills as a receiver. Had the touchdown out of the backfield on 3rd and 19. Very comfortable and confident.

"Sims, you see this tremendous upside with him. Like a baby giraffe out there. Has good instincts. Really the game is slow for him for a freshman. Got size, arm talent, arm strength, can run. They do a good job of moving him and taking advantage of his skill set. Have some designed quarterback run game as well. You can see from Game 1 what they were doing with him to now, and he's going to cause problems for people for sure."

Clemson held Miami to just 17 points and 210 yards last Saturday, but that type of performance is rare in the early part of the college football season as teams are scoring at a high rate. Venables said there a myriad factors leading to the increase.

"I think systematically people put you in a lot of conflict. We don't spend anytime thinking it's unfair,” he said. “We understand what our stress areas are and we try to protect ourselves and those areas as we build packages week to week. I think if you look back at fall camp and some of the issues people around the country are going through, is not having a full allotment of people or some of the COVID issues. We, like a lot of people I'm sure, were banged up pretty good in camp. You didn't have the same type of armor built through the summer. Working out on your own or going to a personal trainer is just a different type of training. So maybe there was a little less contact. There was a little less here. We tried to stick to it, but we had to get ready for the season too. Some of that is probably in play here, what you're seeing.

"The other side of it is that would be taking away from the efficiency and precision of [offenses]. And what the college rules allow. You cannot pass the line of scrimmage with the offensive linemen blocking and then throw the ball in behind. It's zero yards. In college, it's three yards. And most of the time it doesn't get called. It just doesn't. Game happens fast and it's hard to manage from an official standpoint, so you get put in a lot of conflict. Again, the precision of quarterbacks and receivers and the systems that offenses attack you with some of those run-pass conflicts put them in a very advantageous position, so it is what it is. We just try to have answers to what they do. And to be good fundamentally and still stay aggressive."

Venables is close to getting another weapon back on defense – defensive end Xavier Thomas played a few snaps at the end of the Miami game, the first snaps he’s played this season.

"We put him in [the game] so he must be close. I don't know. It's a process,” Venables said. “I think it's a day-to-day thing. He was excited to get back there. Over these next few weeks, we'll get him back to where he needs to be hopefully in great health and conditioning by the time November rolls around. Very explosive player that can help a position where we are little thin right now."