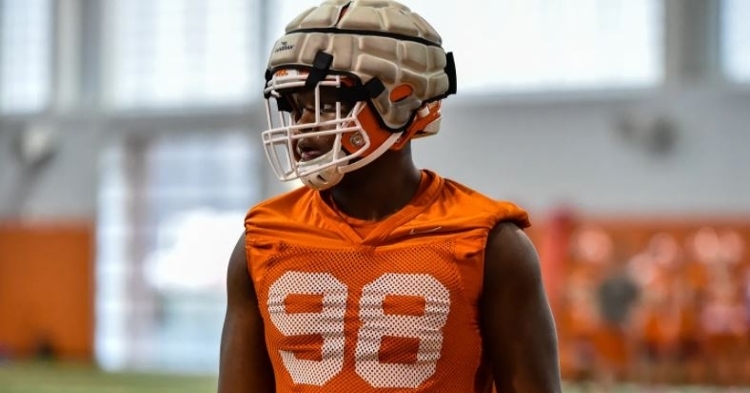 Murphy has a chance to be a high-impact freshman.

Brent Venables likes what he sees out of his defensive line, and he thinks that one freshman could be listed as a co-starter at defensive end.

Clemson’s defensive coordinator met with the media Monday morning to discuss the No. 1 Tigers’ season opener. Clemson travels to Winston-Salem to take on the Demon Deacons at 7:30 pm Saturday (ABC) at Truist Field. The Tigers are a 32.5-point favorite.

*Venables said he is proud of how his team has handled all of this during a weird time, from the COVID to social injustice.

*James Skalski will have to miss the first half of the game at Wake Forest (was ejected in the second half of title game). Jake Venables will replace him in the lineup to start the game. Brent says that Jake has prepared well and got his chances last season, but also feels like Kane Patterson will play.

*Had tight end Braden Galloway on scout team last year and said he was proud of the way he reacted. He said he feels like Galloway grew up and matured and understands what it takes to make a difference every day. On scout team you have to come over and perform and give great effort and you have to have an incredible mindset. Said he helped them get better week in and week out.

*Andrew Booth is high-cut and high-waisted, twitchy, physically and mentally tough. Booth has been at Clemson over a year but has spent a lot of it trying to get healthy. He is confident and has had an excellent camp. “Completely on another planet” mentally from where he was a year ago. Looks like he could play receiver or safety or corner.

*Mario Goodrich – his first play on his high school highlight was a blowup tackle from Cover 2. He said he has a great appreciation for that because most DBs don’t have that as the top play in a highlight video. Has been snakebit with the injury bug. Another big-bodied guy.

*New redshirt rule means you won’t have to worry about burning a redshirt for someone, great rule, benefits the roster.

*Veteran DTs had great camps and played faster. However, the young guys are coming and aren’t going away. There is leadership and veteran savviness. Lot of depth.

*On expectations for freshman defensive lineman: “Our job as coaches is to help them. Telling them they don’t have to make every play and make sure they know what they are good at. They are used to playing at a high level and used to the spotlight being on them. But they are low-maintenance and keep their heads down and come in and work every day and know what they need to do to get better. They work really hard and fight tooth-and-nail every day in hoping we widen the plate for them. I am really proud of these guys and excited about what they bring.”

*Said Wake QB Sam Hartman is tough, great leader, big arm, understands the defense and what the stresses are. He is a coach’s dream. Said he is a good football player, very talented and a tremendous system player. Doesn’t see a whole lot of weaknesses.

*Logan Rudolph leaving broke his heart. One of his favorite players he has ever had at Clemson. Very Ben Boulware-esque. Loves his current group of defensive ends. They are in better shape than they were a year ago. They are seasoned with KJ Henry, Justin Foster, and Justin Mascoll. Myles Murphy has a chance to be a co-starter, just lacks experience and knowledge. They have all had a good spring and fall camp and are fighting and leading every day and are in a better place this year. Says the D-line has a chance to be a strength this year but they still have work to do.

*Wake has one of the faster offenses in college football. They have a very systematic way to attack you. They have an answer for everything you try to do. Clemson has a big-time challenge in that regard for Saturday night.

*On Malcolm Greene, the freshman DB: He has done outstanding. He and Tyler Venables have played the most different spots because of their versatility. He is trying to find out where they are most comfortable. This week is important for Malcolm. He has played safety, nickel, and corner. He loves to compete. The moment is not too big for him. He has great fundamentals, just needs to play within the system and must have a great week to determine where he is in the pecking order.

*Mike Jones Jr. has had a great spring and great camp. He has been a great leader and really come into his own. Mike can do a variety of things. He is a really good football player and has come into his own as a leader.

*At safety, they feel like they have a number of guys who can play. They have starters that are rock solid and then a bunch of other guys that can play. They are hungry, eager, edgy and physical. He feels really good about that group right now.

Brent Venables isn’t focused on the next Isaiah Simmons for the #Clemson defense, but he has high praise for Mike Jones Jr. stepping in at his linebacker spot. (Video courtesy Clemson athletics)