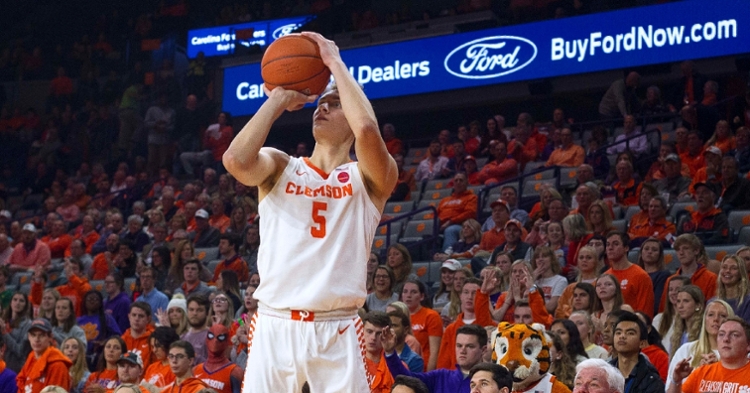 Clemson was a dismal 6-of-16 from the charity stripe, including Clyde Trapp’s 5-for-7.

"This was a hard-fought win. I thought Wake Forest played a really good first half," head coach Brad Brownell said. "Our defense wasn't as sharp in the first half as it was in the second half. [Olivier] Saar put [Wake Forest] in a good spot in a lot of situations. The longer the game went on, the better our rhythm got. We haven't seen much zone in a while, so it bothered us rhythm-wise. In the second half, we made an adjustment, and it worked."

Brownell said Tyson has been on track for a breakout performance.

"Hunter Tyson was outstanding today, and I'm really happy for him," Brownell said. "His 3-point shot was huge when they made a run back at us. He was really good against the zone. We were trying to drive the lane against the zone. He's attacking the basket with more confidence. He's finishing plays. He was a guy who we felt like would continue to get better, and he has."

The teams stayed within hailing distance of each other through most of the first half, and a Tyson jumper at the 11:56 mark tied the score at 15-15. The Tigers then went scoreless over a three-minute span as Wake went on a 9-0 run, and the run eventually reached 12-2 as the Tigers got into foul trouble.

Wake led 27-17 at that point and appeared ready to blow Clemson out of the building, but the Tigers clawed back and trailed just 37-31 at intermission. It was the first time this season that Wake Forest took a lead into the half in an ACC game. Clemson was just 1-of-6 from the free throw line in the half, a few days after a dismal 9-of-23 effort in a loss at NC State.

Clemson started the second half on fire. Tyson hit back-to-back layups to start the half, and with Clemson trailing 47-39 Tevin Mack and Aamir Simms helped the Tigers go on a 7-0 run to pull within one at 47-46. The team jostled back and forth over the next few minutes, and a John Newman runner tied the score at 51-51 with 10:30 to play.

Just as Clemson seemed to gain momentum, the Tigers left Wake’s Andrien White open in the corner and his 3-pointer put Wake ahead 54-51. Wake eventually pushed the lead to 56-51, but Clemson went on a 9-0 run over the next 3:57 to begin to take control. The run started with a Newman layup and then Tyson hit back-to-back layups to put Clemson ahead 57-56 with just over five minutes remaining.

Curran Scott then nailed a 3-pointer from the wing to put Clemson ahead 60-56, forcing Wake head coach Danny Manning to call a timeout. Wake hit three free throws coming out of the timeout to make it 60-59, but Tyson nailed a trey from the wing to put Clemson ahead 63-59 with 3:46 to go. Following a jumper by Wake’s Brandon Childress, Trapp was fouled after hitting a jumper in the lane. He missed the free throw and Clemson led 65-61 with just under three minutes to play.

Wake missed on two consecutive opportunities down the floor, and the Demon Deacons fouled Trapp with 1:11 to play. He missed the first one, but Wake missed a wide-open 3-pointer and had to foul Trapp with 55 seconds left. He missed another one to make Clemson 1-for-10 from the free throw line, but Wake was called for an offensive foul on the other end to bail out the Tigers and their free throw woes.

Curran Scott hit two free throws to put Clemson in front 67-61 with 43.4 seconds left on the game clock. The Demon Deacons got a 3-pointer from White to pull to within three at 67-64 at the 34-second mark and Clemson promptly turned it over and Wake called timeout with 22.7 seconds to play. The Deacs missed a wide-open 3-pointer with 11 seconds remaining and Trapp was fouled on the rebound.

Trapp drew a Bronx cheer when he hit the second of his two free throws to put Clemson ahead 68-64 with 11 seconds remaining. Simms hit two free throws with six seconds to play to give the Tigers the win.

Clemson returns to the floor Saturday, traveling to Louisville for a 2 pm tipoff.