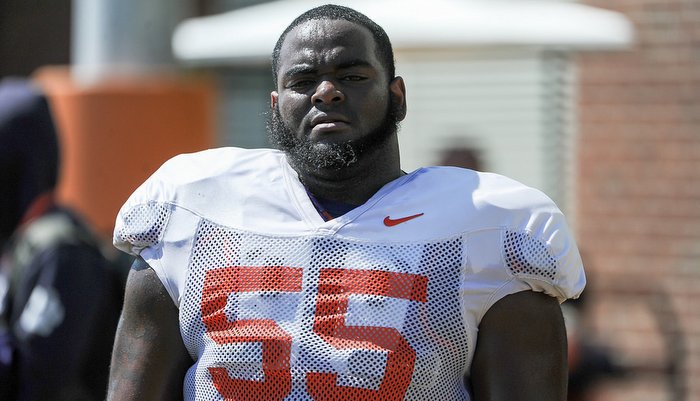 CLEMSON – If the 2015 football season reaches the heights that have been predicted for the Clemson football team, it will require an outstanding effort from an offensive line that has been much-maligned in recent seasons. Tyrone Crowder

Tyrone Crowder
RS So. Offensive Guard
#55 6-2, 330
Marston, NC
View Full Profile has faith that the season will be a success and that the offensive line will lead the way.

Prior to enrolling at Clemson, Crowder was a heavily recruited prospect who was selected to play in the Under Armour All-American game in Florida and the Shrine Bowl of the Carolinas. He was an all-state selection by MaxPreps and was rated as the No. 125 player in the nation by ESPN, the No. 5 offensive guard in the nation and No. 3 player in North Carolina by ESPN.

Heading into 2015, the rising redshirt sophomore is the front-runner to win the starting job at right guard following a 2014 campaign that saw him earn five knockdown blocks in 203 snaps over six games (one start). The right side of Clemson’s line last season was anchored by right tackle Kalon Davis

Reid Webster
Offensive Tackle (2010 - 2014)
#77 6-4, 300
Woodstock, GA
View Full Profile , but both of those players have graduated. Crowder is now the frontrunner and says that the snaps he earned last season can only help this season.

“That was very important for me. I didn't get a ton of snaps, but I got enough to learn the defenses and learn the game speed,” Crowder told TigerNet recently. “That kind of helped me transition into this year and helped me pick up on a few things.”

Film study also showed Crowder what he needs to work on.

“This year, for the spring I had to go back to the basics,” he said, “I had to get simple and work on my techniques. I have been working on my pass protection and that has been a big emphasis this spring. So far I think I have done well.”

“Great improvement. Just tremendous improvement,” Swinney said earlier this week. “Big, big step from where he was this time last year. Just night and day. We are very encouraged with him. He is going into his redshirt sophomore year. He is where we hoped he would be and where we need him to be. He's a good football player. We have four seniors in that starting group and him. He is the only sophomore. He has, I think, really grown up a ton. His body is in good shape. He has really done a nice job of buying into the conditioning part of what we need. He is obviously very strong. He is just much more knowledgeable and confident because of that.”

Crowder has drawn rave reviews from the coaches and his teammates for his work this spring, but he deflects any praise directed his way and prefers to talk about the offensive line as a group.

“I feel like this year, we are more athletic and can move around a little bit. We have more speed and more strength,” Crowder said. “We won't be a pushover. For us, we have to communicate and we have to trust each other. Everybody has to learn the offense and needs to know what they are doing and what the others are doing. It takes a lot of trust.”

He also thinks the offensive line has a chance to be pretty good and will be the year the group will finally silence the critics.

“This offensive line is going to be a pretty big one,” he said. “We have a lot of talent and a lot of athleticism. This year is going to show ‘em.”