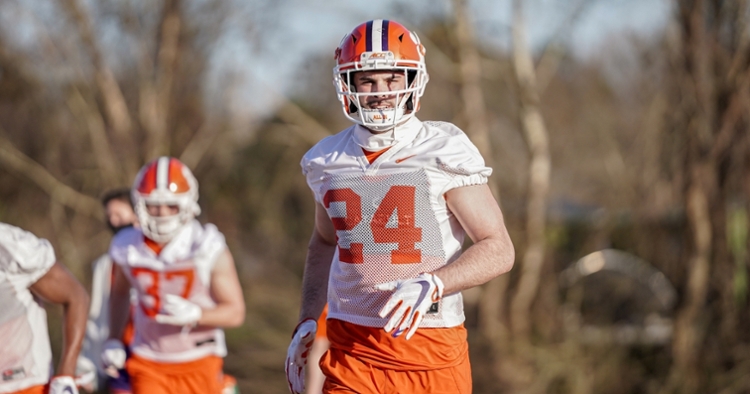 Turner is a part of a core group of "super seniors" on the Tigers this season. (Clemson/Max Kniptstein)

The Sugar Bowl loss to Ohio State last month left a bitter taste in “super” senior safety Nolan Turner's mouth and he knew there was no other choice -- he would return to Clemson for another shot at a National Championship.

“My mind was made up right after the last game,” Turner said after the first spring practice on Wednesday. “There’s things I have to get better at, and obviously the season didn’t end how we wanted it to and to have one more run at it are all things that factored in.”

Turner will now enroll in graduate school at Clemson and have a shot to win a sixth-straight ACC Championship come December this year.

“It was pretty embarrassing, this one stung pretty good,” Turner told the media via Zoom. “I thought we got out-physicaled and we didn’t adjust well during the game. There’s some things we did terribly on the defensive side that we’re trying to take ownership of this spring and get better at.”

Turner led the defense with three interceptions last year and recorded 66 tackles, six of those coming behind the line of scrimmage. A top-15 total defense led by one of, if not the best defensive coordinator in the nation in Brent Venables, returns all but one starter on that side of the ball. Turner knows just how dangerous this 2021 defense could be.

“I think this group has a lot of potential, and we can be a really good defense. We have a really good back-seven. It’s going to be a fun spring watching these guys compete and improve," said Turner.

Turner, who was named a second-team All American by AFCA and USA Today, is not the only sixth-year player returning to play for head coach Dabo Swinney and the Tigers. A few fan favorites will also take the field in Death Valley next year as "super seniors," including the likes of linebacker James Skalski and running back Darien Rencher. Turner said that those guys coming back didn’t affect his decision to return, but it’s definitely an added bonus for him.