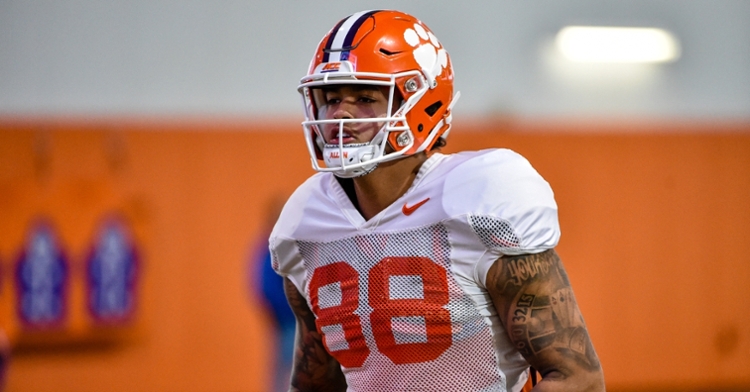 Galloway is ready to be the best version of himself.

Top-ranked Clemson opens the season on Sept. 12 at Truist Field at 7:30 pm (ABC). The Tigers opened as a 32.5 point favorite over the Demon Deacons. Clemson has outscored Wake Forest 115-6 over the last two seasons and has won 11 in a row in the series.

Tuesday’s interview sessions (with all the media via Zoom) were with tight end Braden Galloway and defensive tackle Nyles Pinckney. Here are a few notes from those interviews, with full stories to come.

* Galloway said working with Brent Venables on the scout team last year, when the NCAA didn’t allow him to play, was like playing a full season.

*He is trying to be the best version of himself.

*He feels he can play anywhere on the field. Especially at slot and tight end. He has been moved around a little bit. He is playing tight end 99 percent of the time but feels like he can be versatile and move around if needed.

*In the second scrimmage, he felt like he was blocking really well and was making plays down the field.

*Galloway stays at his apartment when he isn’t at the football facility. Doesn’t feel like it’s fair to put the season in jeopardy by going out and risking catching COVID.

*At Wake Forest, the team will have to bring its own energy. “It will be a different year and you have to bring your best every day because tomorrow they might shut the season down.”

*Everybody (all classes) is being a leader in their own way. Team has different chemistry. When he arrived, everybody looked up to the upperclassmen.

*There are a lot of things that Trevor Lawrence is great at, it’s hard to find many faults. He thinks Lawrence is the best quarterback in the country and he is glad he is his quarterback.

*Davis Allen is going to be a great player, makes plays and is strong at point of attack. Jaelyn Lay and Sage Ennis are still dealing with things and Lay has been dealing with his knee (first day back in a couple of weeks). Unit has great chemistry on and off the field. JC Chalk is a great player and has played a lot the last two or three years -- veteran guy, knows the offense. Feels like they can do a lot of things with the offense. With a year like this, the versatility would be big.

*Had prior knowledge of the Danny Pearman situation, said Pearman has addressed it, but he knows the quality of Pearman and knows what kind of person Pearman is. He is “forgiven and I am happy he is my coach.” Said he knows how Pearman has treated him and other African-American players on the team. Pearman had a conversation with just the tight ends and Pearman then had a conversation with the entire offense. Galloway said mistakes happen and everyone knows the kind of person and coach he is.

*On Xavier Thomas, Galloway said it stinks he got sick before camp because he really worked his tail off to get ready for the season.

*On getting his extra year back from NCAA, he said he tweeted it out as soon as they said something. It’s big. He knows he didn’t do anything wrong so getting that year back will be huge, regardless of what he does with it. Time is on his side now. Stinks because he had to sit out that year. He has moved on from it. Whether they were right or wrong doesn’t matter now, he will try and be the best player he can be.

*Galloway is working on his conditioning to be 100 percent. That is the biggest thing he is working on. Playing football is fun, but it’s a lot of work. Has to learn protections and blocking schemes and a lot goes into it.

*To get ready for empty stadium, there will be music in the locker room and they need team leaders to step up. The motivation is that you have to play your best.

* Pinckney says the rotation is even at defensive tackle and that they are the most experienced and technically-sound group he's been around. Rotation is never the same day-to-day. Pinckney singled out Tyler Davis and Ruke Orhorhoro as young players asking questions in seeking to get better.

* Pinckney talked about his road back to the field this offseason. He had ankle surgery and was in a boot for 6-8 weeks. Said he lost some muscle and it was a hard and frustrating process. In a challenging offseason to stay in shape, he rode bikes, ran in the pool and things like that until he was cleared to run. He feels like he is in good shape and was able to have his weight in a good place.

* Pinckney says they didn't have to talk about opting out much. He feels the team is all eager to play.

* He said they are very appreciative of the NCAA waiver just because anything could happen this year with COVID.

* On the environment at Wake Forest with no crowd, Pinckney says they will be able to self-motivate well and they are ready to play in a night environment.

* Pinckney says center Cade Stewart is a great technician and Jordan McFadden learned from the tackles who graduated well.

* Among young standouts, Malcolm Greene, Bryan Bresee and Trenton Simpson have caught Pinckney's eye. For Greene, it's his energy and drive to be great. For Bresee, he has great motor and is an athlete. Simpson stands out but he's still learning in a tough spot to play in Brent Venables' defense.