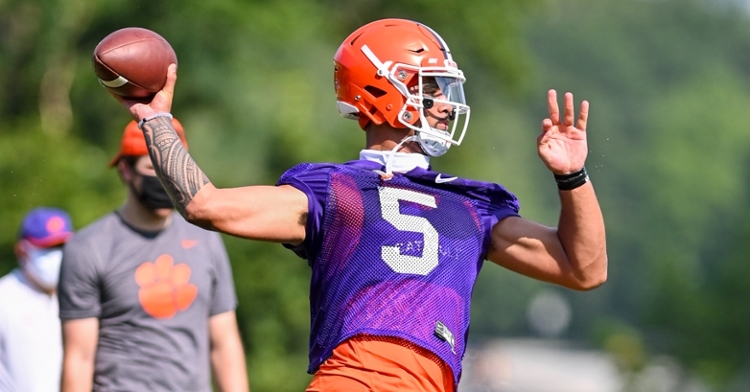 Demarkcus Bowman is the real deal, and DJ Uiagalelei is cut from the same cloth as Trevor Lawrence.

Head coach Dabo Swinney allowed his team to dress and stretch for practice. Following calisthenics, Swinney announced that Tuesday was one of the days off he provides during fall camp and the team participated in Club All In. Club All In allows players and coaches to get up on a stage and perform anything from songs to comedy routines.

Following the event, offensive coordinator Tony Elliott spent 30 minutes answering questions from the media and started by saying fall camp has been a pleasure through the first four practices.

“I think you are seeing a type of enthusiasm because you have an influx of young guys that are eager to get an opportunity,” Elliott said. “I think what all has taken place over the last several months, guys were here and practicing and then football was done for the spring and they are home and they are not used to being in the environment they are used to, it put football in perspective. They are just happy to be back in a routine and there is just a genuine appreciation for being able to do what you love.”

*Elliott said the offensive line has been fun to watch. The four of five projected starters have experience, and Will Putnam has upped his game at right guard. Says of Jordan McFadden (right tackle), "We knew from the day Jordan McFadden got here, he could have a chance to be special and now it's his time." On Blake Vinson (knee), Elliott said Vinson is stil trying to work his way back into shape.

"But Blake, he looks solid so far. He's trying to get wind underneath him, gain his confidence. He's where you'd expect him to be right now," Elliott said. "Next week is going to be a big week for him."

It sounds like freshman Walker Parks is working at left tackle, and Elliott said he didn't notice the Kentucky native.

"The biggest thing I can say is I don't notice him in practice. Kind of like Mitch (Hyatt), he's done his job in practice and I didn't notice him. We haven't called his name much because he's doing what he's supposed to do."

*Wide receivers Frank Ladson and Joseph Ngata are still out for medical protocols.

"So that's put a ton on Brannon Spector's plate. He's playing all three positions in one practice. He's athletic and got a great change of direction," Elliott said. "It's given E.J. Williams an opportunity to move up. We hit a home run with E.J. A lot like Justyn Ross. Fast, great change of direction. Can make the acrobatic catch. Now he's just got to grind away on playbook and details. And then Ajou Ajou, you've heard guys say, is freaky. He has a lot to learn, but I'm really pleased with his athleticism."

*Said he has spoken with running back Travis Etienne and doesn't have an inkling that Etienne would opt out at any point. Said Etienne has also looked good in camp.

"I'm gonna talk to him from the standpoint as if he's my son and I'm gonna give him my coach's opinion," Elliott said. "Some of that information is sensitive between me and Travis stuff, but he's very receptive. That's the beautiful thing about Travis is he's got his head on his shoulder straight on. He's trying to do what's best for the longterm and his future. And right now, he's looked as good as he's ever looked."

*Bowman is as good as advertised.

"Demarkcus is as good as advertised running with the ball. He has juice in his legs and he can really, really go,” Elliott said. “The big thing for Demarkcus is that if you go back and look at him in high school and the program that he came from, it's a totally different philosophy. They were a huddle offense, slow pace, the quarterback ran to the sideline. The biggest thing for him right now is getting adjusted to the play call. We are just now getting into the pads and are just now getting into the install, but right now watching him run around he's as good as advertised with his speed and natural ability to run.”

Kobe Pace is another freshman that has impressed.

"Knock on wood, I keep getting lucky in those small towns,” Elliott said. “When you get a chance to see Kobe, he's not your typical big guy. Very light on his feet. Came from system in high school where he was playing WR, QB, LB, so he did a lot. Got a great football mind and picks up quickly. Little bit more size to him, so when steps in on pass protection, he has girth and size on his side. Very quiet but when on field, he loves to practice and prepare and very focused."

*How does Uiagalelei compare to Lawrence at the same age?

“That is a tough question but he is cut from the same cloth. You are seeing that they share that same demeanor and command, nothing is overwhelming, and they are similar from a protection standpoint,” Elliott said. “They have a similar background there. They are very similar at the same age but that's because they had the same qualities coming out of high school. Nothing rattles them and they have the big arm and they can make the throws. So far with five days of install in, he has pretty good command of it."

*More on Braden Galloway and how he fits into the offense later, but Elliott said he likes the flexibility that Galloway brings to the offense.

"I'm excited for him so we can get back the core part of our offense, and his skill set gives us some flexibility if we need it going forward. We need to have a plan for a plan and we might need all hands on deck,” he said.