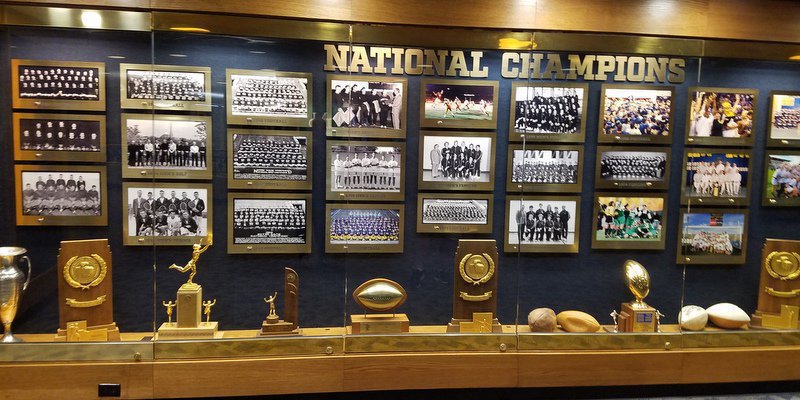 Heritage Hall at Notre Dame is a glimpse into the past

Sometimes you have to see other places to make you appreciate what you have.

Excuse me for stepping away from recruiting for a day, but I wanted to relate part of our trip to Kentucky last week for the ACC Baseball Championship. My wife Nikki and I drove to Louisville but stayed with friends of ours just over the river in Indiana.

Because Clemson had two days in between games in the ACC’s ridiculous format, I mentioned to Nikki that we were as close to Chicago and venerable Wrigley Field as we would be all summer, so following Wednesday's interview session we drove to Chicago and took in that night’s Cubs game against the San Francisco. Send me an email and I’ll tell you all about our trip to Wrigley, but for now let me skip ahead to the following day.

We saw a few of the sights in Chicago – including Comiskey Park, Soldier Field, and Navy Pier, and I once again gave her the speech that, “We’re as close to Notre Dame as we’ll be in a while.” We left Chicago Thursday afternoon and drove the two hours into South Bend, Indiana.

I sent Clemson football SID (Sports Information Director) Tim Bourret a text asking what we should see while we were on Notre Dame’s campus. Bourret, a Notre Dame grad, quickly called us and said we might be passing on the interstate at some point – he was already in Lexington and was driving to Chicago for men’s golf.

He gave us the high points to see, and we happily cruised into Notre Dame. You have to understand my wife – she loves college football as much or more than any man you’ll see, and she was grinning from ear to ear as we turned the corner and saw Notre Dame Stadium. She gladly makes these side trips with me see to see campuses and stadiums, and she would rather roam around Notre Dame Stadium than go shopping (yes, I know, she’s a keeper).

We drove onto campus, and the names began to jump out of history at me – Leahy and Rockne and Parseghian and Holtz. The stadium is undergoing renovations, but we wandered around one of the quads and took the requisite picture with Touchdown Jesus in the background.

Bourret told us to step inside the Joyce Athletic and Convocation Center – the home to many Irish athletic programs – and head upstairs to the Sports Heritage Hall. The hall is a mini museum of Notre Dame sports history, complete with National Championship trophies and Heisman Trophies.

I was surprised that the hall was open – it was after six on a weekday – and it was not only open, we seemed to be the only people on the premises (and that is a huge building). We left and continued our journey around campus – the Lourdes Grotto, the Golden Dome and Basilica, Knute Rockne’s statue and Hammes Notre Dame Bookstore, which had two of Bourret’s books for sale out front.

The campus itself is gorgeous, and all of the buildings and athletic facilities drip with history and tradition. We went across the street to an Italian restaurant (Parisi’s) recommended by Bourret, who said it was a favorite of his good friend Digger Phelps. We didn’t find Digger, but we found a wonderful meal and we uploaded some of our photos to Facebook.

I’ll explain. As I drove back to Louisville that night, I told Nikki that if I was a coach at Notre Dame, I simply take recruits on a tour of all the old buildings, of Heritage Hall, show them the names and the places that make up Irish lore, and tell them: Come be a part of this. Everything on the campus has a historical patina to it that makes you know it’s authentic.

But I also realized that in football, Notre Dame hasn’t really realized all of that potential since 1988. The Irish claim 13 football national titles, but just four since 1949. That’s why the Heritage Hall features photos of George Gipp and Rockne and the Four Horsemen.

On the flip side, Clemson’s facilities are (except for Memorial Stadium, which itself has seen recent upgrades) are mostly brand new. The indoor practice facility was built in 2013, and the new football operations center opened for business this past February.

Swinney and Clemson’s coaches are selling the here and now and the future. The upgrades in the facilities might seem to be complete, but Swinney told us earlier this month that there are plans in the works for improvements to Death Valley.

We drove into the Indiana night, and as the miles continued to slip past I thought about the sights and sounds of college football. I plugged my phone into the car and played several college football fight songs and wondered if recruits today know who The Four Horsemen or other notable Irish greats happen to be. Probably not. But they all know Watkins and Watson and Boulware and Swinney, and I am glad that Clemson is capitalizing on its recent success and not relying (as Clemson was, not so long ago) on the success of decades ago.

The contrast between Clemson and other schools continued on the trip. Louisville has athletic facilities that are new and second to none. But as you drive into the area that surrounds the campus, you see the stadium with “Papa John’s” covering the upper decks and adorning the inside and outside of the edifice. All of the athletic venues have corporate names, and I told Nikki I hope I never see the day that we have a Tom Wynkopp Stadium on campus (with apologies to Tom) or see the Blue Ridge Security Memorial Stadium.

We stopped in Lexington on the way home and saw that Kentucky’s Commonwealth Stadium is no longer Commonwealth – it’s Kroger Field (this happened earlier this month). Nikki also got to see Tennessee’s Neyland Stadium up close, and we pulled into home late Saturday night.

Monday, I drove back onto campus and saw the Clemson facilities and wondered at the here and now. Progress is everywhere on campus, with renovations at Doug Kingsmore and Littlejohn Coliseum, and the image of a National Championship in football everywhere you look.

Sometimes you have to travel to other places and take it all in to realize that you have it pretty darn good. And while I loved Notre Dame’s campus and love the way they embrace their tradition, I rolled my window down Monday and smelled the honeysuckle and the threat of rain and realized I can’t wait for Tiger Rag and the Tigers to run down the hill.

Around here, we love our past, but our future is pretty darn exciting, too.

*NOTE: We didn't get to spend as much time at Notre Dame as we would have liked, but I understand they have some beautiful football facilities. The campus, like I said, is stunning, and definitely worth the trip if you're up that way. And if you like Italian, eat at Parisi's.