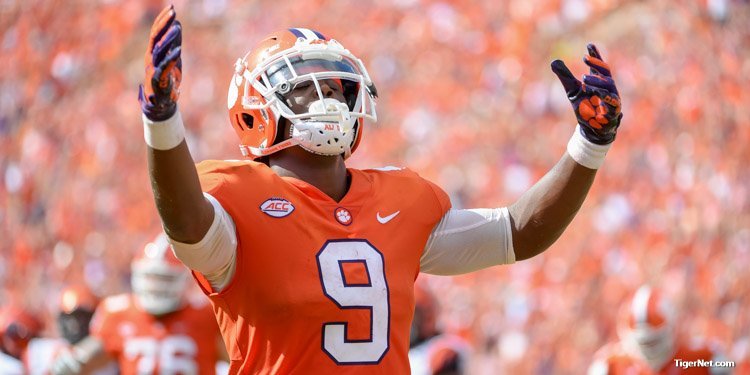 CLEMSON – Travis Etienne ran over the hearts of Syracuse defenders, into the hearts of Clemson fans and directly into the Heisman Trophy conversation.

Or, at the very least, people should start realizing Etienne is one of the best running backs in the country.

The sophomore out of Louisiana ran for a career-high 203 yards on a career-high 27 carries, scoring three touchdowns and averaging 7.5 yards per carry. He had 86 yards in the fourth quarter alone, leading No. 3 Clemson to a come-from-behind 27-23 victory over Syracuse.

Etienne’s final score was a two-yard touchdown run with 41 seconds remaining in the game, lifting Clemson to the win.

“The offensive line created tremendous holes for us to just get out there and run free. Our job is to make the safety miss, and the offensive line helped us take that to the next level,” Etienne said after the game. “Also, the receivers being who they are, they got some great blocks down the field and that just really helped us.

“I feel like it was a great win. We faced adversity throughout the game. We just couldn’t get it right. We just had to keep fighting and keep pushing through. It just really builds character, and I think the team needed it.”

“He just continues to be himself. He runs hard and refuses to go down...he takes some chances, but more often than not, when he takes those chances, they pay off big,” Elliott said. “I’m really, really proud of him and the way he ran the football and really, really proud of [Adam] Choice and Tavien [Feaster] as well. I probably would have liked to get Feaster and Choice a couple more carries, but Travis had the hot hand, and we were in a situation where we needed our best guys in the game, and that’s why he got those carries.”

Trailing 23-20 with 6:06 remaining on the clock, the Tigers took over on their own six-yard line. In the huddle, Etienne said the offensive players knew what they had to do – define the moment.

“We were talking about treating it like any other drive, keeping our poise,” Etienne said. “Don’t let the moment define you, you define the moment. We just had that mentality.”

Etienne said the drive will pay dividends down the road.

“I felt like that was a defining moment for this team. Just having that drive with Chase [Brice] coming out there and making that big throw and then coming right back,” he said. “Then having Tavien [Feaster] just go and impose his will on the defense. He got out there and gave us that spark, and credit goes to him and the offensive line for doing their job.”

With former starting quarterback Kelly Bryant nowhere to be seen and Saturday starter Trevor Lawrence in the locker room, the coaches leaned on the running game.

“It was a great opportunity to have the coaches leaning on the running game. Tavien and Adam [Choice], them coming in and making their plays, getting that spark from me, it just really helps me. The line and the receivers…I can’t reiterate it enough...they just did a great job blocking for me. That last touchdown, I think I walked in untouched. It was just wide open. That’s credit to my offensive line and my tight ends.”

Etienne’s previous career high for rushing yards was 162, set against Georgia Southern earlier this season. His 27 attempts represented the first 20-carry game of his career.

Etienne became the first Clemson player to rush for three touchdowns in a game since Wayne Gallman on Nov. 12, 2016 against Pittsburgh.

With his second touchdown on Saturday, Etienne reached 20 career rushing touchdowns in his 18th career game.

Etienne became the first Clemson player to rush for 100 yards in three straight games since both Wayne Gallman and Deshaun Watson accomplished the feat against South Carolina, North Carolina and Oklahoma in 2015.

Etienne became the first Clemson player to rush for a touchdown in five straight games since Wayne Gallman's seven-game streak in games 8-14 in 2016.