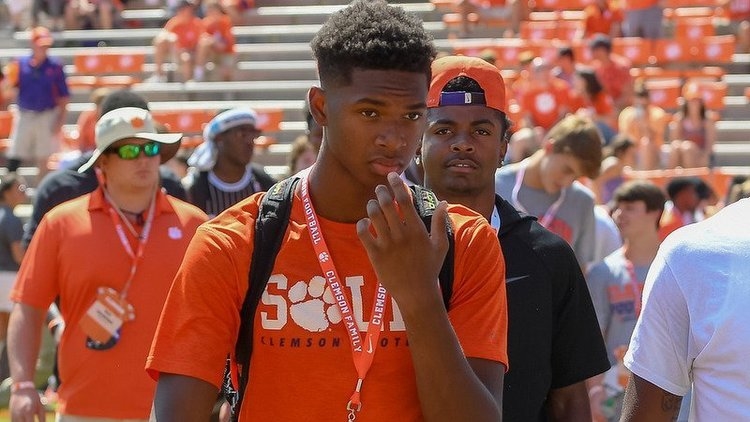 Could EJ Williams be the next great Clemson wide receiver out of Alabama?

Williams is the 2020 4-star receiver out of Phenix City (AL) Central who is the former teammate of current Clemson receiver Justyn Ross.

Ross put the college football world on notice with his play in the College Football Playoff, exploding for 301 receiving yards and three touchdowns in victories against Notre Dame and Alabama.

Williams has burned a trail between his east Alabama town, hard against the Georgia line, and the Clemson campus. He was back Saturday for the Tigers’ elite junior day, his second visit in two weeks and his fourth since last season's opening game.

"It was a great visit, as always," Williams said. "I was impressed with how intrigued coach Swinney was with all the recruits and how we were doing. And the fact that he stood in front of us for an hour and thirty minutes telling us about how to be a man and a great football player. I also got a tour of the campus and it's amazing."

Williams did not get a chance to meet privately with Swinney, but he did get some time with receivers coach Jeff Scott who reiterated to him how he sees him fitting into the offense.

"The nine-man is the go-to-guy at receiver on the field, and coach Scott told me that's what he would develop me into," he said.

Williams is still going thru his due diligence with the school and while Clemson certainly has a place in his mind, he's not ready to assign anyone favored status.

"I like Clemson, but I also like a lot of other schools," Williams said. "I've been to Georgia recently and I'm going to Auburn this weekend and Alabama the next weekend. Clemson is still coming at me hard. Probably them and Alabama and Auburn are coming at me the hardest right now."

Williams also has mentioned Florida, Florida State, Ole Miss, and LSU as some top schools with him.

This past season, Williams had 40 catches for 368 yards and nine touchdowns.