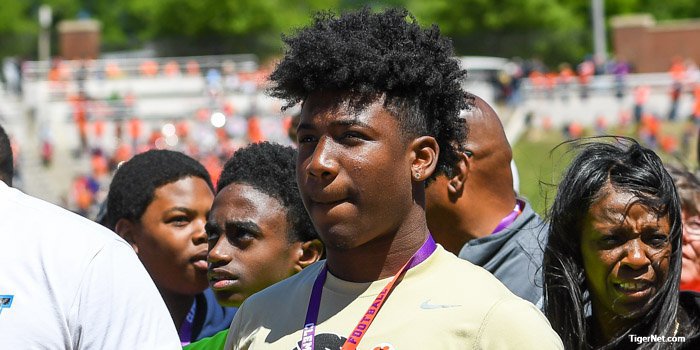 Charles Thomas, a young star linebacker out of Langston Hughes High School in Fulton County, Georgia, says he was elated and thankful to receive an offer to play football at Clemson.

“Blessed, honored, and thankful to receive an offer from Clemson,” he tweeted, along with the hashtags “#ALLIN,” “#Clemson” and “#true19.”

“That's one of the top schools I've always wanted to go to,” Thomas told TigerNet by phone recently. “It was like a dream when I first received it – it was crazy.”

The 2019 prospect said he immediately fell in love with the campus while attending this spring's Orange-White Game.

“Man, it was beautiful – my whole family liked it,” he said. “And I had taken my friend, and he was like, 'Man, I wish I played football, I would commit here!' ”

The Tigers have joined a growing list of programs in the hunt for the 6-foot, 216-pound defender, who as a freshman tallied 107 tackles, with a pair each of forced fumbles and fumble recoveries. Thomas plays inside and outside linebacker and also contributes on special teams.

“I don't like to stop working – I just do the best I can to help the team,” he said of his mindset and approach to the game. “I'm a team player and a hard worker. That's the reason I put in work, so I can be able to help the team in situations.”

He said he's optimistic about the coming season and anticipates stepping into more of a leadership role for the Langston Hughes Panthers, in the Atlanta suburb of Fairburn.

He said it's too early in the recruiting process for him to compile a list of top schools, although, with three seasons of high school ball ahead of him, he already has offers from Michigan, Tennessee, Toledo, West Virginia, Maryland and Tulane. He's looking forward to making official visits and plans to major in criminal justice.

“Every time I turn on the TV, I just watch him because he amazes me,” he said.

Thomas recently attended a Rivals camp at the Georgia Dome but has yet to attend a Dabo Swinney Football Camp at Clemson.