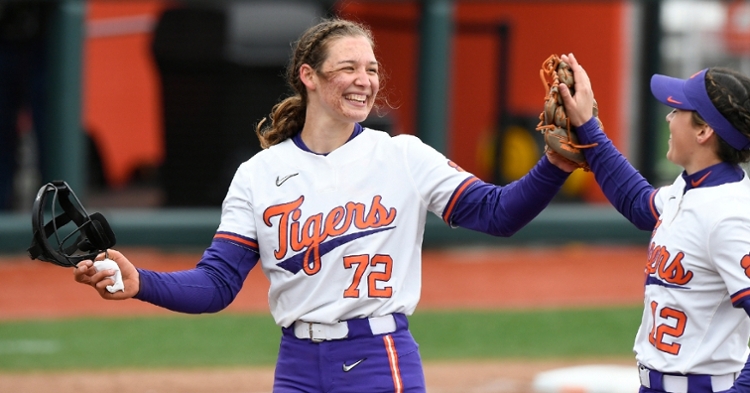 Valerie Cagle improved to 3-1 on the season (ACC file photo).

The Clemson softball program got back to its winning ways on Saturday afternoon in Atlanta, defeating the Georgia Tech Yellow Jackets 5-2. Valerie Cagle continued her hot start to the season in the circle, as the redshirt freshman tossed her third complete game already, scattering seven hits across 7.0 innings of two-run, four-strikeout softball. The ace of Rittman’s staff moves to 3-1 on the season inside of the circle.

Overall, the Tigers move to 4-2 and climb back to .500 in ACC play at 2-2. The Tigers and Yellow Jackets will conclude their three-game series tomorrow with a doubleheader starting at 1:30 PM (ACCNX).

The Tigers threatened in the first inning of the contest, loading the bases after back-to-back singles to begin the game. Clemson loaded the bases via an Abi Stuart walk with two outs, but a strikeout by the Yellow Jacket pitcher Blake Nelemen got them out of an early jam.

The Clemson bats finally warmed up during the third inning, scoring three runs on three hits to take a 3-0 lead. With the top of the order up, A single to left field by McKenzie Clark started the rally for the Tigers. After back-to-back walks to Grace Mattimore and Cagle, the Tigers scored the first run of the game off a Marissa Guimbarda sacrifice fly, scoring Clark from third base. Two batters later, senior second baseman Cammy Pereira launched a ball down the left field line for a double, clearing the bases and extending the Clemson lead, 3-0.

Georgia Tech cut into the Clemson lead in the bottom half of the inning, stringing together two hits to plate a run and cut the score to 3-1.

The Yellow Jackets added another run in the fourth, and threatened to add more before Cagle forced the batter into an inning-ending ground out. The two teams would head to the fifth inning with Clemson leading, 3-2.

Catcher JoJo Hyatt gave the Tigers the insurance runs they needed in the fifth, sending a single up the middle that scored two and increased the Clemson lead, 5-2. It was the first two RBIs of the season for the redshirt freshman out of Buford, Georgia.

Georgia Tech did mount a rally in the sixth, using two hits to put runners on second and third with two outs, but Cagle once again reached into her bag of tricks and forced a line out to the first baseman to keep it a 5-2 game headed to the final frame.

Cagle finished the game with a 1-2-3 bottom of the seventh inning in the circle and helped Clemson get back on track with its second ACC win of the season.