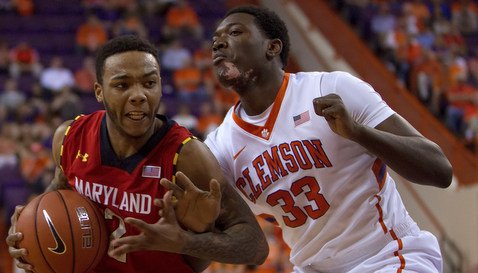 Rod Hall
Jr. Guard
#4 6-1, 210
Augusta, GA
View Full Profile doesn’t pay attention to how many minutes he plays or how tired he might feel on the court, a mindset that paid dividends Sunday afternoon.

Hall said that at no point did he ever want to come out of the game and his focus was solely on beating the Terrapins.

The Terrapins jumped ahead 67-64 early in the second overtime, but a Hall jumper a few minutes later gave Clemson a 70-69 lead with just a little over two minutes remaining. The Terrapins went back ahead 71-70 on a Seth Allen jumper 30 seconds later, but Damarcus Harrison

Seth Allen had 20 points to lead Maryland. Allen's final basket gave the Terrapins a 71-70 lead with 1:27 to go. That's when McDaniels drove the lane and found Harrison open in the right corner for his only 3-pointer of the game. Maryland missed all four of its shots in regulation after that.

K.J. McDaniels
Jr. Forward
#32 6-6, 200
Birmingham, AL
View Full Profile had 26 points and 14 rebounds, and he notched his seventh game this season with double-figure points and rebounds. He also had six blocks for the Tigers (18-10, 9-7) who won nine ACC games for just the ninth time in program history.

Clemson head coach Brad Brownell said that he was proud of the way his team continued to battle throughout the game and never gave despite the starters playing the final 20 minutes.

“Terrific win for our guys. I thought we showed a ton of resiliency, especially throughout the last 8-10 minutes of the game," Brownell said. "We got down, had a little lead and lost it late in regulation, but guys fought back and made plays. We had a chance at the end of regulation to win it, but didn’t get it done there. It was the same thing in the first overtime. We made a mistake defensively and they made a big three. Then in the second overtime, K.J. (McDaniels) had a move at the rim which you expect him to get the foul.

“The guys came back a little dejected after the first overtime and I tried to stay positive. We rode our starters pretty hard down the stretch. They played a lot of minutes and I think they showed a lot of guts and courage to hang in there and come back and win. They could have given in at any time down the stretch, but for them to find a way to win, that was really good and I’m proud of them.”

Maryland (15-14, 7-9) entered the contest trailing Clemson by just one game for sixth place in the ACC standings, and a win would have given Clemson’s ACC seeding a big hit. However, the Tigers’ win now enables them to hold onto sixth place with home games against Miami and Pitt remaining. The win also ensures that Clemson avoids playing on Wednesday in the ACC Tournament, and if they hold on to the sixth spot in the standings, would play the winner of Wednesday's game between the No. 11 seed and the No. 14 seed.

The Tigers were cold to start the game, missing each of their first eight shots before a McDaniels layup broke the ice almost five minutes into the game. However, the Terps weren’t faring much better, and it took an 8-0 run over a three-minute span for the Terrapins to jump out to a 12-5 lead.

The Tigers retook the lead at 17-16 on a short jumper by Damarcus Harrison with just over eight minutes left in the half, but Maryland responded with a 11-1 run, taking its biggest lead of the half at 27-18 on a layup by Charles Mitchell at the four minute mark.

The Tigers jumped out to a 39-34 lead to begin the second half, but Maryland’s 3-point shooting kep the Terrapins close and the teams stayed close throughout much of the half, with Maryland eventually taking the lead only to see a McDaniels free throw tie the score at 54-54 with 2:10 left in the game.

Maryland had a chance to take the lead on the ensuing possession but turned it over, but McDaniels missed a long 3-pointer and then Maryland missed a layup with just over a minute remaining to set up the final flurry of regulation that saw both teams miss shots, the overtime set up when Adonis Filer

Adonis Filer
So. Guard
#3 6-2, 190
Chicago, IL
View Full Profile ’s falling underhand shot was off the mark at the buzzer.

In the second overtime, Rod Hall appeared to clinch a win with a big-3-pointer at the 19 second mark – it would have put Clemson ahead 63-59 – but the officials called it a 2-pointer after video review. Ten seconds later, Evan Smotrycz hit a wide-open trey to tie the score at 62-62, and a short McDaniels runner at the buzzer bounced out of the cylinder to force a second overtime.