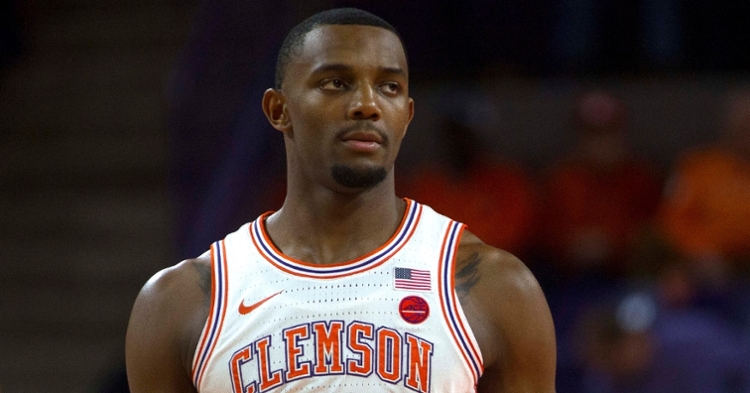 Simms is bringing along some young talents on the interior. (Photo: Josh Kelly / USATODAY)

"We’re young. We’ve got a lot of players. I think we’re 12-deep," Simms said. "We can play anybody similar to a Florida State rotation. And everybody can do a little bit of everything. Very versatile. We’re still trying to piece together what lineup is the best because there’s so many different perspectives to look from on who can really be out there together -- and who plays well together...

"I think looking out to the season, it’s going to be pretty good and one of the best Brownell will have in his coaching (career) so far."

Media expectations are more tepid, as Clemson was picked 10th out of 15 ACC teams this week. The Tigers return four of their top-5 scorers from a 16-15 campaign last season that ended in a win at the ACC Tournament before a COVID-19 cancellation. They finished 65th in ESPN’s BPI metric and 72nd on KenPom (where they are No. 40 preseason; eighth-best in the ACC).

Brownell says Simms has put the freshman bigs Hall and Kidd through a gauntlet in preseason practice to get them ready.

“The more that they practice and the more they get a feel for our system, the more things slow down a little bit for them and they’re able to be more productive,” Brownell said. “PJ has a tremendous upside and he’s going to be a great player at Clemson. He’s big, he’s strong, he’s smart -- he’s going to need a little patience. We’re trying to be as patient as we can but we also know we need him to be ready and to be good. We’re pushing him and Aamir has done a great job of mentoring he and Lynn every day in practice. Just showing them -- if you want to be a great player, just watch that guy every day.”

Simms says he will have them ready.

“They go against me every day so they definitely get the physicality part. So against the other opponents, I think they’ll be just fine,” Simms said with a smile.

Health or the lack thereof played a key role in some inconsistency of a 2019-20 season that included several highs (three home top-5 wins) and enough lows for a .500 record going into the ACC Tournament. Brownell indicated that his team was rounding the turn on some minor injuries over the offseason for guards Chase Hunter (finger) and John Newman III (knee) and forward Jonathan Baehre (knee), with them expected to help in the Nov. 25 neutral-site opener versus Mississippi State in Melbourne, Florida (8:30 p.m./CBS Sports Network).

Brownell is also enthusiastic about some depth and returning experience at guard, where sophomore Al-Amir Dawes is back and former Atlantic 10 all-freshman team member Nick Honor is eligible to play now (led Fordham with 15.3 PPG in 2018-19).

“(Dawes) made eight game-winning plays in (the win over ACC champion FSU last year),” Brownell said. “Not just the layup to win the game. He made eight plays with confidence and swagger against the best team in our league, where he made great plays. You saw him grow and develop. He has that same confidence and swagger and an extremely competitive guy. Very valuable defensively because he’s unbelievable at getting over ball screens, fighting for the ball and just working.

“We’re excited to add Nick Honor to that because you have two little guys who both play with speed and pace and can allow you to be a little more aggressive playing the ball. I’m really excited about those two.”

On Brownell’s mind -- and coaches across the sport -- will be just how smaller (or no) crowds due to COVID-19 will affect the games this season. Brownell is putting the onus on his team to bring it every game.

“I think that’s going to be a real challenge. I think this year could just be unlike any other,” he said. “We don’t know the problems -- the challenges it will present. Littlejohn when it’s packed makes a huge impact on our team. You see that even in non-conference games when we’re playing in front of 4,000 versus when we’re playing in front of 8 or 9,000. Sometimes you can see the energy being different. I’ve talked about with our team that we have to create our own energy. We need guys to be energy-givers. And that’s going to be important.

“When you go on the road, there’s not going to be a lot of juice and some teams are really going to struggle and wear down and have guys out with COVID and other injuries. Teams that keep their spirit will have the best chance at success and that will be a huge challenge for coaches.”

Clemson is scheduled to host its first home game on Dec. 2 against S.C. State (1,860-fan capacity).