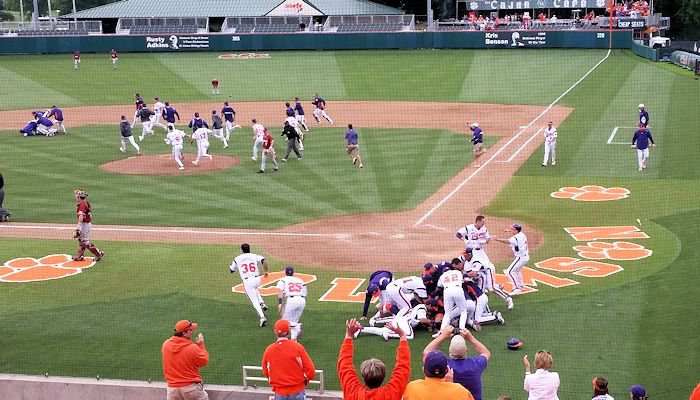 CLEMSON – Up off the deck. Back from the dead. Nail in the coffin. Turn out the lights. Digging yourself out of a hole. Name the cliché that describes a miraculous comeback, and it fits what the Clemson baseball team accomplished Saturday afternoon.

But those tired clichés don’t even begin to describe the emotion felt by the coaches, players and the faithful fans that remained inside of Doug Kingsmore Stadium. Jay Baum

Garrett Boulware
Jr. Catcher
#30 6-1, 210
Anderson, SC
View Full Profile from first base – Boulware later said it was the fastest he’s ever rounded the bases in his life – setting off a celebration worthy of a Super Regional win as the Tigers defeated Boston College 10-9 in 13 innings.

It wasn’t a Super Regional, but the win gave the Tigers a No. 5 seed in next week’s ACC Tournament, and only helped Clemson’s NCAA Tournament chances. A loss would have almost certainly have killed those tournament chances, and Clemson would have entered the ACC tourney as losers of 12 of their last 17 ACC games, including going 2-4 against ACC cellar dwellers Notre Dame and Boston College.

Instead, they have a new outlook and a little bit of confidence heading into the homestretch. The Tigers trailed by seven runs in the seventh, they were down five going to the ninth, down four with one out left and down three while down to their last strike on multiple pitches.

The early deficits were a reflection of the lead gray skies and chilly conditions, the kind of depressing afternoon that seemed to be a microcosm of a depressing season. Fans left in droves, and those that stayed were wanting, praying and aching for something good to happen.

It did. Jon McGibbon

Jon McGibbon
Sr. 1st Base
#12 6-1, 220
Lindenhurst, NY
View Full Profile came delivered a 3-run double that tied the score in the ninth, and Baum’s double scored Boulware with the running run. What was once an emotionless stadium, the winds of hope instead blowing in clouds of despair, were at once replaced by a little bit of sunshine.

Jack Leggett
Baseball Head Coach
View Full Profile , looking as old and haggard as I’ve ever seen him, could only shake his head at first.

“It shows the character of this team and that they are never going to give up,” said Leggett. “Our guys battled. We scored five runs and four with two outs in the ninth inning. Jon McGibbon came up with a huge hit to clear the bases and tie the score. Matt Campbell

Matt Campbell
Sr. RH Pitcher
#36 5-11, 195
Alpharetta, GA
View Full Profile came in and pitched his heart out. A lot of good things happened today, and I am proud of how our kids battled and how tough they were.”

Leggett said that he was almost willing Boulware around the bases.

“I almost beat him to home plate,” Leggett said. “I had him attached to my hip, I think. (Boulware) just happened to be in the right spot. There were two outs. He was on the move. As soon as it was hit, I was thinking this is going to be close so I was gaging it before he got to second base and then he cut the ball off with his backhand side and I was hoping he would bobble it once or something, but he caught it cleanly.”

Reliever Matt Campbell – who usually pitches two innings – had already pitched five strong innings in collecting career highs in pitches (84) and innings (5). With Campbell facing a sixth inning, Boulware said he was thinking about his teammate during his romp around the bases.

“He has not thrown that in four years,” Boulware said. “It was the bottom of the 13th or whatever it was and I was like, ‘I have to score this run.’ I knew we had other guys in the pen but he was on lockdown and we did not need to push him any further.”

Because of McGibbon’s heroics, Campbell’s stellar work and Boulware’s speed in crunch time the Tigers will be the fifth-seed in next week’s ACC Tournament in Greensboro, N.C., and avoided having to play in the play-in game on Tuesday.

That also meant the Tigers might make the NCAA Tournament field and avoid staying home for just the second time in 28 years, something that Leggett said he was fully aware of.

“It could have been. It could have been,” Leggett said. “That’s all there is to it. You don’t want to get in the play-in game. You want to get to Wednesday and we needed to especially with the pitchers we used up today. If we had to play on Tuesday, it would have been a tough challenge for us. So who knows how it will pan out at the end? We have to go to the ACC Tournament and do some good things.”