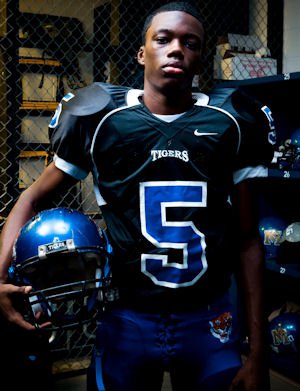 Photos courtesy of Will Redmond

Defensive line coach Dan Brooks was in Memphis on Thursday, and stopped by Memphis East High School to check in on athlete Will Redmond

Later that night, just as Redmond got home, Tiger defensive backs coach Charlie Harbison called Redmond with the news that Clemson was offering Redmond (6-0, 180) a full ride as a defensive back.

“He called me and said Clemson was offering a full scholarship,” Redmond told TigerNet on Friday. “I am excited about the offer. I know Clemson is a great school.”

Redmond plays all over the field for Memphis East, and actually rushed for 1,862 yards and 11 touchdowns as a junior. He also threw for 886 yards with 11 touchdowns, but said he is leaning towards wanting to play in the defensive backfield in college.

Redmond admitted to not knowing much about Clemson or the football program, but said Harbison and Brooks have both encouraged him to go online and do some research – which he did.

“He told me to go out and take a look at everything Clemson has to offer,” he said. “So I have been doing that. I have been looking to see what their educational opportunities are and if they have my major.”

Redmond claims offers from Clemson, Cincinnati, Vanderbilt, Memphis, Western Kentucky and Mississippi State, and he said he now has Clemson in his top three, along with the Bearcats and Commodores. He plans on visiting Clemson in early June.

Tags: Will Redmond
Trending on TigerNet