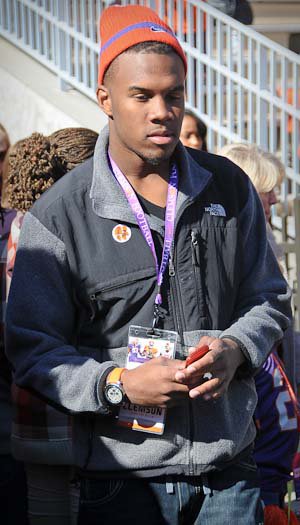 View Full Profile has been around Clemson his entire life, and that is all because of his father.

Saturday, during junior day at Clemson, he received an offer from Clemson head coach Dabo Swinney

View Full Profile , and that is all because of his own hard work.

The 6-3, 210-pound linebacker/receiver out of Central’s Daniel High School was taking a tour of Vickery Hall with the other juniors when defensive line coach Dan Brooks came and took him out of the tour for a trip to Swinney’s office.

“I was in the middle of the tour, and Coach Brooks got me out of the tour,” Greenlee told TigerNet Saturday night. “I knew something was up, and he took me to see Coach Swinney. He sat down with me, and he said he had known me since I was a little kid, and he knew I had that extra gear they are looking for, and he wanted to offer me a full scholarship.”

Greenlee has grown up around Clemson because his dad is Larry Greenlee, who just completed his 13th year as a full time Assistant Strength & Conditioning coach under Joey Batson. Prior to that, he was a graduate assistant for two years under Batson, and he won four ACC Championship titles and two national runner-up titles as a member of Clemson’s track team.

Greenlee said his dad knew the offer was coming, but managed to keep it a secret from his son.

“My dad knew, he basically knew the whole week,” Greenlee said. “He said he was going to walk around like he was mad at me the whole week so he wouldn’t let it out. By the time he got up there [to Swinney’s office] I was coming out. It was exciting.”

The Tigers are Greenlee’s first offer, and he said the coaching staff didn’t discuss what position they envisioned him playing on the next level, but he racked up 91 tackles, three interceptions and four fumble recoveries on defense for the Lions this past season.

He did say, however, that turning Clemson down would be a hard thing to do.

“I am going to still look around, but Clemson is where I want to be,” he said. “It’s close to home, and it’s kind of hard leaving something that you’ve been around your whole life. I want to stay at home, and I want to go where I can have success.”

Greenlee said the Clemson coaches wanted to make sure that he understood that he earned the offer, and that it wasn’t given because of his dad.

“A lot of people are going to think my dad is the reason I got offered,” he said. “That is nowhere close to the reason. My dad and Coach Swinney told me that I have worked hard for this, and that is the way I feel.”