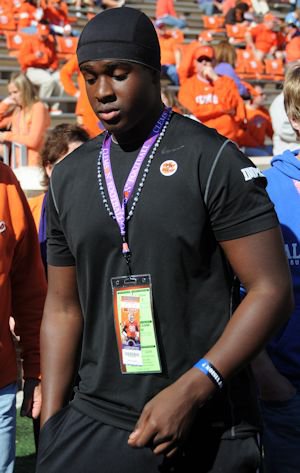 CLEMSON – While Clemson fans were enjoying Clemson’s 59-38 victory over North Carolina Saturday afternoon in Death Valley, there was another observer who was having just as much fun.

And he decided to do something about it.

R.J. Prince
Offensive Line
6-6, 285
Albemarle, NC
View Full Profile , one of the southeast’s top junior offensive tackle recruits, decided during the middle of the game that he had seen all he needed to see and the Albemarle native made his decision – Clemson is where he wants to attend college.

As a result, he went up to Clemson recruiting coordinator Jeff Scott after the game, and the 2013 prospect gave his verbal pledge to the Tigers.

“During the game, I just thought to myself that I needed to pull the trigger on this one,” Prince told TigerNet after the game. “It just felt like the right time to do it. It was just something I had to do. I love Clemson and I felt like I had to do it.”

“He was very excited,” Prince said of Swinney. “He was showing us a lot of love. He told me to work hard and keep my grades up. He also said welcome to the family. I was standing there and I was like, ‘I can't believe I am doing this.’ It is so good to know that I am loved by so many people down there.”

Prince said he liked what he saw out of Clemson’s offense in the game.

“It was very up-tempo, and they put a lot of points on a team that is very well-coached,” he said. “That was a very good performance. I loved the atmosphere there today.”