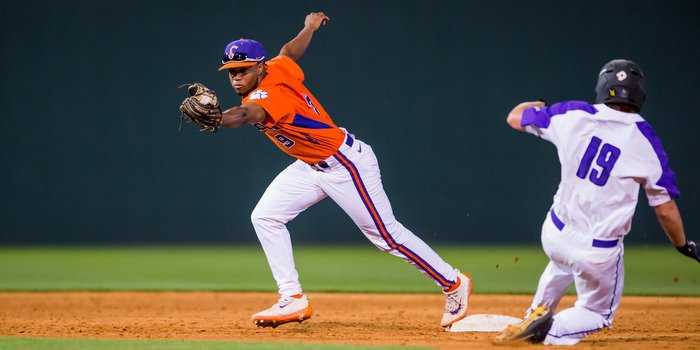 Tyler Jackson pitched 5 1/3 innings in picking up the win and improving to 8-1 on the season. Logan Davidson, Reed Rohlman and (Weston) Jackson drove in two runs apiece for the Tigers, who had 15 hits.

Clemson improves to 37-12 with the win, while Furman drops to 25-23 with the loss. The Paladins had won 14 out of their last 16 entering the contest. The Tigers host ACC Atlantic leader Louisville in a three-game series that starts Friday. Clemson hasn’t lost a midweek game in a year, last losing to Charleston in early May of 2016.

Clemson head coach Monte Lee said it's his team's "every game is the same" mentality that has led to their success in midweek games.

"It's just an emphasis on every single game is important. We don't really talk about big games or big series. I just don't believe in that," Lee said after Tuesday's game. "I believe in we play baseball the same way all of the time. It doesn't matter who is in the other dugout. We don't put more emphasis on Louisville than we do Furman. If you want to be playing deep into the postseason at the end of the year, you have to understand that you have to play good baseball all of the time. I think maybe that's it. We just don't look at a mid-week game as being a lesser game than a weekend game."

The Tigers jumped out to an early lead. Davidson led off the game with a solo homer, launching a 3-2 pitch over the wall in left-center for his eighth homer of the season. Rohlman walked, and one out later Seth Beer walked to put runners at first and second. Andrew Cox followed with a single to right that scored Rohlman for a 2-0 lead, and Jordan Greene smacked a single to left that scored Beer for Clemson’s third run. The inning ended when Cox was thrown out at second.

The Paladins got a run in the bottom of the frame, using a hit batter and a single to make it 3-1 after the first inning.

Grayson Byrd singled to left to open the second, moved into scoring position on a bunt by Kyle Wilkie and scored Clemson’s 4th run on a single up the middle by Davidson. The Tigers added another run in the third after Beer led off with a double to left-center. He came around to score on Weston Jackson’s triple off the wall in right, and Byrd made it 6-1 when he dumped an RBI single into center that scored Jackson.

Landon Kay homered to right in the bottom of the fourth to make it 6-2, but Clemson added three in the fifth.

Cox doubled to lead off the inning, and walks to Weston Jackson and Byrd loaded the bases. Wilkie drew another walk to score Cox, making it 7-2, and Rohlman doubled off the wall in right, scoring Byrd and Jackson. Wilkie was thrown out at the plate, however, and Clemson led 9-2.

Beer walked to lead off the sixth and moved to second on a passed ball. That brought up Jackson, who laced a shot to right that wound up as his second triple of the night. It scored Beer and Clemson extended the lead to 10-2.

Brandon Elmy homered to center to lead off the bottom of the sixth, his 10th of the season. The Paladins added a single, a double and an error that scored two more runs, and Clemson held a 10-5 lead at the end of the sixth.

Lee said his team has to continue to work on eliminating the big inning if they're going to be successful going forward.

"They barrelled up some baseballs and Owen came in and really calmed things down for us," he said. "I thought we swung the bats very well. We had some two-strike hits. We had some two-out hits. I thought approach wise and just overall impressiveness at the plate, I thought we did a really good job. We tried to limit that big inning. That's been one thing we've got to continue to work on and improve in that area. There were a few too many free passes, but overall we swung the bats very well and I thought the pitching staff did a nice job."

The first game of the Louisville series will be Friday at 6:30 p.m.