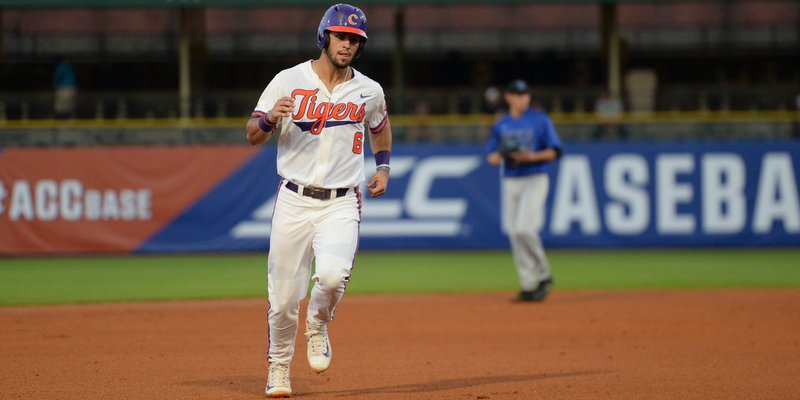 Cox had one of Clemson's three homers

Because of pod play, Clemson has no chance to advance past Friday’s game against Virginia, and once that game is over the Tigers will head home to await its NCAA Tournament fate.

The Blue Devils committed one error but otherwise played sterling defense, making several diving stops on the infield and at least one nice catch in the outfield.

"First and foremost, give Duke a lot of credit. They threw the ball exceptionally well. Mitch Stallings, their starting pitcher did a great job and Hendrix their reliever did an outstanding job out of the bullpen, only one walk," Lee said. "The runs that we scored all were on solo home runs so he did -- their pitching staff did a nice job with runners on base and man, did they make some great plays at the end of the game, made a play at third base to get a lead out at second, and then made a really nice play at second base, made a great play laying out to his left to make a great play.

"Offensively and pitching wise they did a nice job, and there in the eighth inning with two strikes, I think it was their eight hitter, Phillips, came up with a huge hit right there to extend their lead. So you know, they did a good job. You've got to give them credit. They outplayed us tonight. They were the better team, and they deserved to win."

Duke’s Jimmy Herron led off the game with a single to left. He advanced to second on a ground ball and came around to score on a two-out single by Jack Labosky, giving the Blue Devils an early 1-0 lead.

The Tigers didn’t trail for long, however, as leadoff hitter Chase Pinder drilled a 1-0 pitch over the tiger paw in left field to tie the game in the bottom of the first. It was his seventh home run of the season.

Andrew Cox led off the second inning with an 0-1 blast down the right field line – his sixth homer of the season – giving Clemson a 2-1 lead.

The Tigers continued to play long ball in adding another run. Logan Davidson smashed his 11th home run of the season onto the berm in left-center to extend Clemson’s lead to 3-1 after four innings.

Michael Smicklas led off the fifth with a double and scored on dropped fly ball by Reed Rohlman to cut Clemson’s lead to 3-2.

On just four days rest, starter Charlie Barnes pitched six innings giving up two runs – one earned - on six hits. He threw 86 pitches – 54 for strikes – and struck out four. With his fourth strikeout, Barnes has 109 strikeouts this season, the most since Kris Benson struck out 204 in 1996.

Because of the short rest, Lee said Barnes was on a strict pitch count.

"It's a good question. We took Charlie out at 86 pitches because he was on four days rest not five days rest, so he hadn't pitched on four days rest all year, and we felt like he had done his job," Lee said. "Any time you take a kid, pitch him on short rest, you have to be cognizant of the fact that pitch counts are going to matter, and we need him next week. We were hoping to get about 80 pitches out of him in max, and we got 86 out of him, and he did his job, and then we turned it over."

The Blue Devils tied the game against reliever Alex Eubanks in the seventh. A walk and single put runners at second and third with two out, and Chris Proctor drilled a single between short and third, tying the game at 3-3. Eubanks got a strikeout to end the threat.

Owen Griffith replaced Eubanks in the eighth, and the Blue Devils took the lead. Griffin Conine singled to lead off the inning, and he moved to second on a wild pitch. Kennie Taylor hit a short fly ball behind the bag at first, but Jordan Greene dropped it, allowing Taylor to reach.

Lee said the error on Greene was a miscommunication between the second baseman and right fielder Weston Jackson.

"As far as the play down the line, you know, Jordan Greene had a better angle on the ball. Obviously, it's a ball on the line and it's right behind first base, but I played right field, I know what it's like as an outfielder to come in hard on a baseball and the ball is up above you and sometimes you don't -- he was calling the ball. Jordan was calling the ball and I think Weston called the ball, too," he said. "I think Weston just called it a little too late. There was nothing Jordan could do as far as trying to peel off or get out of the way at that point. I think he just called it a little bit too late, and he was probably just trying to do much.

"It was probably more of Jordan's ball, probably an easier play for Jordan even though Weston got there. It seems like they collided right as the ball was hitting one of their gloves. I couldn't tell who it hit, but Greeney is pretty good on balls down the line like that, and he wasn't angling straight back, he was going kind of to his left on a diagonal line, so it probably was more Jordan's ball. I think Weston was just trying to be aggressive, was just trying to make a play, and you know, unfortunately for us, they both collided as they were trying to make the catch. But they were both calling the ball."

Smicklas doubled down the line at third, allowing Conine to score for a 4-3 lead. Griffith was replaced by Ryley Gilliam, who induced a short pop into right that Greene caught for the second out. However, Jalen Phillips laced a single to right, scoring both runs for a 6-3 Duke lead.

Seth Beer was hit by a pitch to lead off the bottom of the eighth, but the Blue Devils made two diving stops in the infield to snuff out any kind of rally.