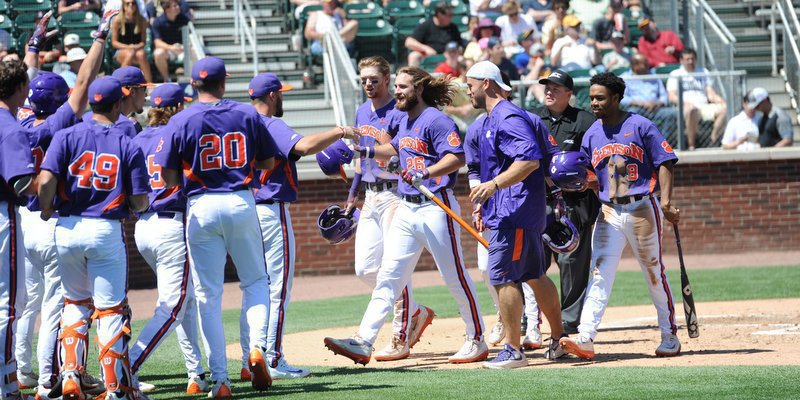 Rohlman is one of the country's hottest hitters right now

CLEMSON – Two of the hottest teams in the country clash tonight when No. 3 Clemson travels to Chapel Hill to take on No. 4 North Carolina.

The Tigers are also taking along Reed Rohlman, who might be the nation’s hottest hitter.

Clemson (34-8 overall) is second in the ACC Atlantic Division standings with a 16-5 league mark, one game behind first-place Louisville (17-4), while UNC (33-9) sits atop the Coastal Division with a 16-5 record in the ACC.

“I don't say anything to guys when they're really swinging it well. I think the key is just making sure he's got a consistent routine every day,” Lee said. “Oftentimes, when a guy is swinging the bat really, really well, you just want to keep them in the same mode every day with what they're doing and their pre-game cage work, what they're doing in their BP rounds. Whatever their focus is and whatever they're doing, you just want to keep them within a consistent routine.

“The one thing that stands out right now about Reed is he is having a lot of fun, which he should be when the ball looks like volleyball coming in there, but he's just relaxed. He's not pressing at all and I could kind of see that at the front end of this streak that he's on where he's seeing the ball really good and pretty much anything that's up and over the plate, he's hammering it right now. I think he's just relaxed and loose and having fun. I don't mess with him. One thing I've never been guilty of is I'm not going to over-coach a guy. If he's hitting well and he's being him, that I'll let him be him.”

“Bukauskas is a guy that's probably going to pitch in the big leagues. We're going to see a future big leaguer,” Lee said. “I talked to a scout about him last night at length and he said that this is a guy you could see pitch in the big leagues as early as this summer. He thinks he's that good. This is a kid that pitches in the mid to upper 90s and throws a slider in the upper 80s, so you're talking about a power fastball and a power slider. It's a heck of a challenge for us, but we've just got to gear up and time it up and we've got to be aggressive. He's going to give you something over the plate and you've got to be on time to hit it.”

The Tigers have just 14 games remaining in the regular season, and that includes a big series against Louisville in two weeks, but Lee said Clemson is worried about just one game.

“We're just worried about game one down there because it's the next game on the schedule. We're going to do everything we can to prepare our guys to get ready for their Friday night guy who is one of the best in the country,” Lee said. “We've just got to compete. He may run through some innings against us, but our guys are going to be confident that they'll find a way. Charlie has to be Charlie and he has to pitch like a Friday night guy to give us a chance. Our guy is pretty good and we feel good any time Charlie toes the rubber. It's going to be a great challenge for us. It's what college baseball is all about - two top five teams going at it - and it's not going to get any better on our end. We're excited about it.

“I just look at it as this may be the best team that we've played this year up to this point from top to bottom - pitching, defense, offense, baserunning, athleticism. That's really all that I look at. What a great challenge for our team. We feel like we've got a good team and we're playing on the road against one of the best teams in the country. It's a great challenge for us and the tougher it is the better we like it. The message this week will be the tougher the challenge, the better we like it. Let's embrace the challenge. Let's enjoy the challenge. That's why you're at Clemson. That's why you're in the ACC. If we want to host a Regional and accomplish those types of things, this is what it's going to be like. We're going to be ready for it. We've just got to stay loose and go compete.”