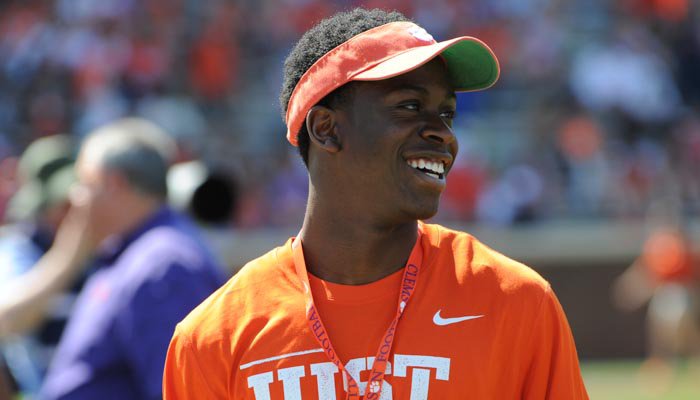 Chalmer all smiles after his commitment on Saturday.

View Full Profile knew from the first time he stepped foot on Clemson’s campus that he wanted to be a Tiger.

Chalmers commitment gives the Clemson coaching staff nine verbals for the 2015 recruiting cycle, and he joins Van Smith out of Charlotte (NC) as the second defensive back who has given a verbal to this point.

There has been speculation over the last several weeks that the three-star corner back from Greenwood (SC) was favoring the Tigers, and it turns out the speculation was correct.

“I kind of figured that I was going to commit a couple of weeks ago, but I was just waiting until the spring game,” Chalmers told TigerNet Sunday afternoon.

The 5-11, 177-pound prospect chose the Tigers over South Carolina, North Carolina, Tennessee, Stanford, Washington State, Marshall, Georgia Tech and Duke and he said that there is just something different about Clemson.

“The first visit I ever took, I kind of figured that Clemson was where I wanted to go,” Chalmers said. “Clemson has a different atmosphere than other places. They have great coaches and a great environment.”

Chalmers delivered the good news to the Clemson coaches shortly before the beginning of the annual Orange and White game.

“When I first got there, I told Coach [Mike] Reed that I wanted to have a meeting with him and Coach [Dabo] Swinney,” Chalmers said. “We had the meeting and we sat there and talked for a little while and they talked to my parents. After we talked, I told them that I wanted to commit. The coaches were really excited and they hugged me.”

Chalmers said that he is a physical, shut down corner, but it was actions off the field that attracted Clemson’s defensive backs coach to him.

“He [Reed] liked everything about me on and off the field,” Chalmers said. “The way I handle my business off the field. And, then on the field he likes my coverage skills.”

As a junior, Chalmers accounted for 80 tackles, four interceptions and 12 pass breakups. As a sophomore, he had 45 tackles and 4 sacks.