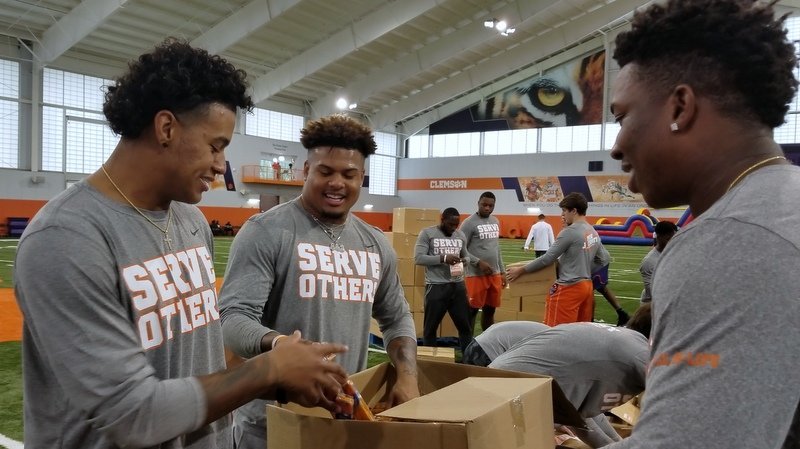 CLEMSON, S.C. — Clemson Football took to the practice field in a different capacity on Tuesday, welcoming local families to the Poe Indoor Facility as part of the team's annual fall community service event.

The event was organized and hosted by P.A.W. Journey, Clemson Football's program to cultivate leadership in student-athletes through personal growth, life skills and professional development. This year's service project was specifically created using the preferences and feedback of the team's student-athletes, helping them serve people and projects about which they were passionate.

"It's so important that we provide our young people an opportunity to serve and give and make a difference for others," Head Coach Dabo Swinney said. "I just think that's such a powerful lesson for everybody. It's something I learned early on as a kid. I know this: I had a lot of people serve me when I needed it, so this is an opportunity for me to give back and for these players to gain such great perspective and do something together and work together."

This year's event focused on the areas of health and hunger and was made possible through a number of partnerships. Through the Littlejohn Community Center, more than 300 families from Clemson, Central and Seneca were invited to participate in the event. Golden Harvest Food Bank provided healthy groceries for the team to assemble and distribute.

One end zone played host to the Kids Zone, where Clemson players personally connected with youth in attendance and participated in inflatable games, tailgate games, football drills and more. And under the philosophy of "Look Good, Feel Good," Clemson's team haircare stylists were on hand to provide free haircuts to attendees.

"Any day that you can give back to the community that supports us the way they do, it's a huge deal for us and a huge deal for our program," P.A.W. Journey ambassador/tight end Milan Richard said. "I'm definitely really excited about this day and it's something that we look forward to each year."

The day also represented an opportunity for one of Clemson's own to be honored for his longstanding commitment to service, as offensive lineman Sean Pollard was formally recognized for his selection to the Allstate AFCA Good Works Team. At the start of the team's afternoon meeting, Swinney called Pollard to the front of the room, where Allstate representative Angie Devore was on-site to surprise Pollard with his trophy in front of his teammates. 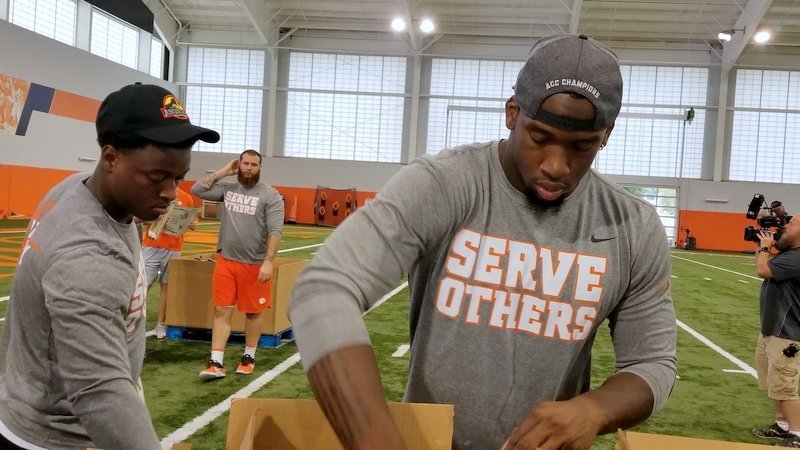 "It's a blessing," Pollard said. "I don't do it for the honor, but it's awesome to get that award."

Voting remains open for fans to select Pollard, a junior from Jackson Springs, N.C., as captain of the 2018 AFCA Good Works Team. Pollard has been a presence in the community since his arrival at Clemson, creating and coordinating the All Off for Cancer event in 2017 and 2018 and raising more than $21,000 to provide funds and activities for pediatric oncology patients and their families.

"I've been serving since I was young," Pollard said. "I came from a service household. With my parents, we'd make sure we could always better ourselves by bettering other people. It's part of my life, part of my character, part of me. It's something I just want to keep growing and growing."

Several team spokesmen - plus the Tigers head coach Dabo Swinney - spoke about what the day meant to them.

Golden Harvest executive director Travis McNeal said the event is "inspiring." He talks about what kind of impact the day brings for the community: