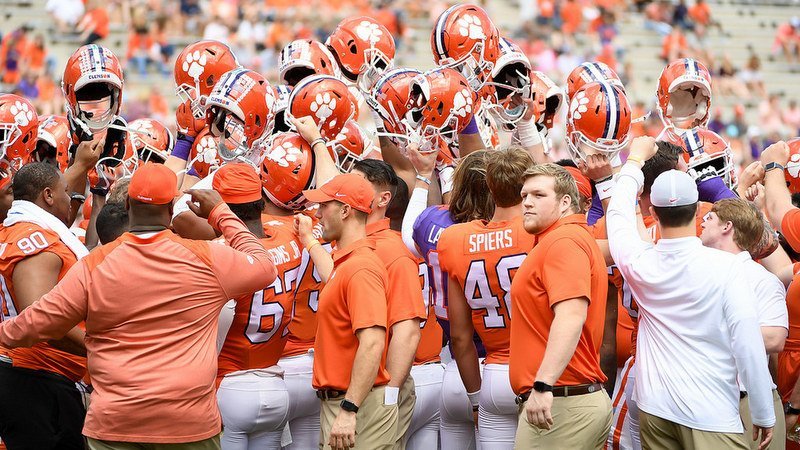 CLEMSON – Thursday’s scrimmage in Death Valley was a battle of the elite versus the elite.

Clemson’s defense is expected to be among the nation’s best this season and receives most of the praise from the national media. Defensive coordinator Brent Venables told the media Thursday that the Tiger offense is pretty good, too.

“It's not just the running backs, it's the receivers," Venables said. "If I just had to worry about the run, it would be pretty easy to defend them, but you have quality people out here, quality quarterback, and a bunch of good players too with scholarships at Clemson. We recruit really well, so you're looking at the elite of the elite. We have a good veteran offensive line with 400 snaps or more, which I think is most in the country. So you got a lot of talent and experience."

The defense didn’t live up to expectations in the first scrimmage – the offense dominated – but fared better in Thursday’s outing.

"Pleased with a lot of things and not pleased with some other things, but I think we definitely got better today,” Venables said. “Who we thought and hoped that they were is who they've been the first couple of weeks. It was good. Solid. It was a good last scrimmage. We got a lot of situations in and put a lot of stress on our guys the last few weeks leading up to today.”

Venables said he has been pleased with the leadership shown by veteran players in the secondary.

"I think Trayvon (Mullen), A.J. (Terrell), and Tanner (Muse) and K’Von (Wallace) — I think all four of those guys have taken a step in leadership and holding their teammates accountable,” Venables said. “At the same time, if you're going to be that guy, you have to bring it every day. If you're going to open your mouth to lead or correct, then you better set the example. Those guys have all taken a step forward that way."

However, the lack of depth means that freshmen Kyler McMichael and Mario Goodrich will have to play this season.

“I think we’re going to have to count on some of our young corners,” Venables said. “I think that’s where we lack the most experience, so helping them come along and grow up here the next weeks and even once you get into the season. There will be some growth that still takes place.”

Overall, Venables has been pleased with the way the defense has performed in fall camp.

“It’s tough. We intentionally try to put stress on them and get them to react to things maybe they’re not prepared for and see how they react whether it’s on the field on or in the meeting room,” he said. “We’ve got a lot of experience coming back. It’s a very mature group of guys. They know how to work. They know how to prepare. They know how to get coached the right way. They know how to respond the right way and they love to compete in practice. What we thought and hoped that they were is who they’ve been so far through the first couple of weeks.”