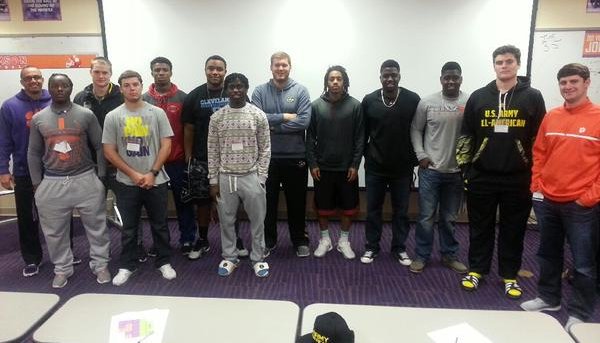 CLEMSON – The next wave of Clemson football players is already on campus.

A substantial portion of the Tigers' nationally-ranked 2015 class of commitments signed non-binding 'financial aid agreements' back in August, the first step toward January enrollment. Thirteen players signed those agreements back in August, and while there have been a few changes along the way the majority of the early enrollees have either arrived on campus or will arrive on Monday.

Three members that signed those agreements back in August decided against early enrollment. Running back Ray Ray McCloud

View Full Profile of Orlando, Florida, decided to spend the final semester of his senior season closer to home as well.

Joining the 10 who signed the financial aid agreements are twins Judah Davis and J.D. Davis out of Daniel High School. Clemson offered a greyshirt offer to the Davis twins back in June of 2013, and they committed. They are the sons of former Clemson great, Jeff Davis. Another greyshirt who is enrolling is linebacker Jalen Williams of Blythewood, South Carolina.

View Full Profile of Orangeburg, South Carolina committed to Clemson last month and will also be enrolling for the spring semester.

Dabo Swinney
Head Coach
View Full Profile about the midyear enrollees, and he had this to say:

On filling the need on offensive line

“We signed four offensive linemen – Jake Fruhmorgen, Mitch Hyatt, Noah Green and Zach Giella. That was a big focus for us and a critical need for our team. Having four outstanding offensive line prospects arriving on campus in January is tremendous. We’ve got guys moving on after this year – three or four seniors this year – and these guys are all made of the right stuff.

“They love to play. They’re big, strong, and athletic. I kid with them all of the time and tell them that I have picture of them and that I’m going to bring it to their senior banquet and show them where they came from because I know what they are capable of accomplishing.”

“Quarterback was another big need for us. We lose Cole Stoudt and David Olson. We needed to address that and we did that. I’m real excited about Tucker Israel. He just jumped out us. Chad Morris

Chad Morris
Offensive Coordinator / QBs
View Full Profile was the first to get on him and it paid off. And Kelly Bryant is a big physical guy – 6-3 or 6-4 and 200-plus pounds. We more than addressed our need.”

“Van Smith is what we’re looking for at the safety position. A kid that I’m very excited about is Kaleb Chalmers. He’s one of the best young corners that I’ve seen come through our camp. To watch him up close, he is put together. He is physically blessed. Chad Smith is a guy that not a lot of people knew about. Brent Venables

Brent Venables
Def. Coordinator / Linebackers
View Full Profile did a great job recruiting him and evaluating him. He’s got what you’re looking for in a linebacker – size, toughness, smart, and he loves football. We’ve all learned what a dynamic personality he has. It didn’t surprise any of us how he competed at The Opening. He’s another one that knew what he wanted to do and he will be an excellent leader in the 2015 class.”

“Really, really excited to get this guy. Albert is a guy we see as a difference-maker that’s going to come in here mid-year. That’s huge for us. Albert is a guy that’s going to impact us right away. Clemson people are going to love Albert Huggins. He’s not just a great football player, he’s a dynamic, big personality that comes from a great Momma and Daddy. Just gets it.

“He will embrace the Clemson experience, and I don’t have any doubt when it’s all said and done he’ll be one of those guys that will become a face of our program as he grows and matures into what we know he can be. He’s physically ready. Mentally you got to get him and coach him up. Losing six seniors, he’s going to have a lot of opportunity coming up.”