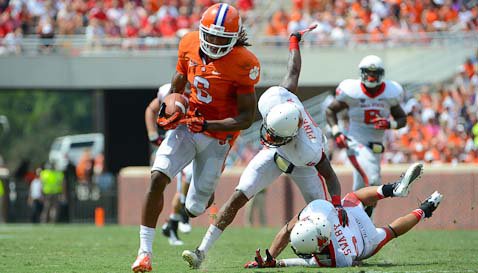 10.) Clemson is averaging 237 yards on the ground. That is good enough for 2nd in the ACC (behind GT) and 25th nationally. Those numbers are against the 78th (Ball State) and 109th (Auburn) ranked rush defenses.

9.) On the flip side, Clemson’s Rush Defense is allowing 216 yards on the ground. That puts them at 12th in the ACC and 98th nationally. Those numbers are against the 8th (Ball State) and 80th (Auburn) ranked rushing offenses.

Cole Stoudt
So. Quarterback
#8 6-5, 205
Dublin, OH
View Full Profile threw his first touchdown as a Tiger and went 12 of 18 for 123 yards in just under 22 minutes of play. In all of last season, Stoudt only went 12 of 21 for 115 yards. Stoudt is gaining valuable experience if Boyd has to come out of the game.

Bonus stat: After 1 week the NFL and NCAA leading rushers were from the same school. Clemson (Ellington and Spiller)