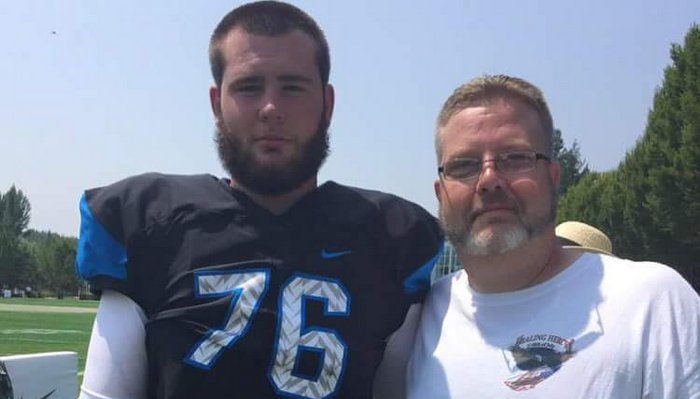 Sean Pollard poses with his dad at Nike's The Opening

View Full Profile said that he was headed to Nike’s The Opening in Oregon this week to get better and that his trip to Nike’s signature event wasn’t about ratings or free apparel.

Late Thursday, Pollard echoed those remarks when he told TigerNet that the highlight for him has been the coaching he has received.

“It's been awesome. I've been working with Coach (LaCharles) Bentley and another coach, and they said I talk a little too much,” Pollard said late Thursday. “Which we all knew that. But it's been fun and fun to learn. It's been good to learn about pass protection, because we don't pass protect at my school a lot. It's been good for me to pick up some things. “

Bentley won the Rimington Trophy while at Ohio St., and later played and started in 57 games in the NFL. Pollard said Bentley took the time to help him with his run blocking.

As a result, Pollard finished the first day as one of the camp’s top five offensive linemen.

“I believe I've held my own. I haven't had anything bad written about me, so I guess that's a good thing,” he said. “I was one of the MVP's on the first day, in the top five. My ankle has bothered me a little bit and I think it affected me a little bit, but other than that I think I've done pretty good.”

Pollard has played mostly guard in high school, but worked out at tackle at the Nike Charlotte Regional and has played both guard and tackle while in Oregon.

“I've been getting equal reps between tackle and guard, but mostly right tackle when I work out at the tackle spot,” Pollard said. “I think I've done really well there. I haven't lost any of the battles there. I will play wherever the coaches decide to put me. I don't care as long as I get on the field.”

Pollard said learning to play tackle has been challenging, but he likes the fact that he’s not only learning, he’s opening the eyes of people that didn’t think he could make the transition.