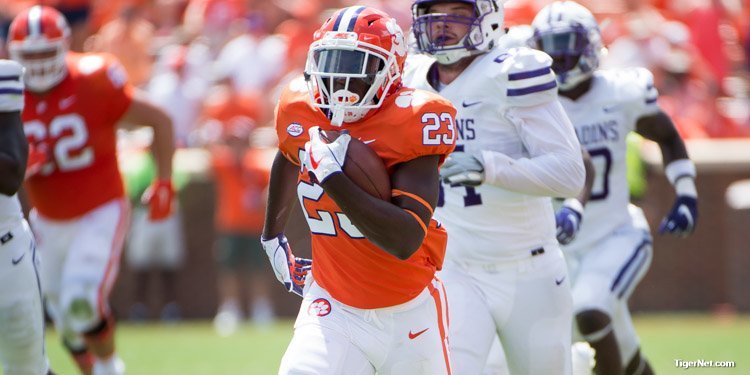 Clemson will start practice for the Cotton Bowl later this week and we move on to the College Football Playoff portion of the season. With the regular season and ACC Championship in the proverbial rearview mirror, there are several stats and notes I find interesting, and many of them tell the story of the season.

Clemson defeated South Carolina 16 days ago, and since then there are a few stats considering the rivalry I’ll throw your way.

During South Carolina’s five-game winning streak over the Tigers, the Gamecocks outscored Clemson 155-71. During Clemson’s current five-game streak, Clemson has outscored South Carolina 218-101. That means the average score during the South Carolina streak was 31-14.2, while the current averages are Clemson 43.6-20.2.

*Dating back to Clemson’s loss at Georgia Tech in November of 2014, the Tigers have won 56 of their last 60 games.

*The Tigers are 85-11 since Brent Venables took over the defensive coordinator after the 2011 season.

*Talk about balance - Clemson ran 435 pass plays this season, with 281 completions for 3511 yards. Clemson ran 500 running plays for 3377 yards. As for the rushing stats – Clemson pushed its season rushing yardage total to 3,377, the second-best mark in school history. The 2018 Tigers trail only the 1978 Tigers (3,469, first) on the school's all-time leaderboard for rushing yards in a season. That means a good effort against Notre Dame will break the record.

*Clemson has been tested in the fourth quarter twice this season - at Texas A&M and against Syracuse a few weeks later. Trevor Lawrence was not the QB of record in either one of those games – Kelly Bryant finished the game at Texas A&M and Chase Brice finished the win against Syracuse, leading a game-winning drive from deep in Clemson’s own territory.

*Including the 42 points against Pitt, Clemson has now scored 590 points, breaking the school record for points in a season, held previously by the 2016 Tigers (588).

*Interesting to maybe just me, but…. with the win over Pittsburgh, the Tigers have now won their most recent meeting against all 13 ACC institutions and Notre Dame.

*The victory over Pitt was Clemson’s 101st of the decade.

*The Tigers will also have a streak on the line against the Irish on December 29th - Clemson won its ninth straight game in December, a streak that dates back to the 2011 ACC Championship Game against Virginia Tech. Prior to the current streak, Clemson had never won more than three consecutive December games.

*Head coach Dabo Swinney earned his 114th career victory to pass Frank Beamer (113) for third-most career wins as head coach of an ACC program. (Note: Beamer's figure reflects his 113 wins after Virginia Tech joined the ACC as a member institution, excluding his victories as an independent or as a member of other conferences).

*Freshman running back Lyn-J Dixon is fourth on the team in carries this season (56) but sits second in rushing yards with 536. Dixon also has enough carries to qualify for the national rankings, and his 9.57 yards per carry average leads the country.