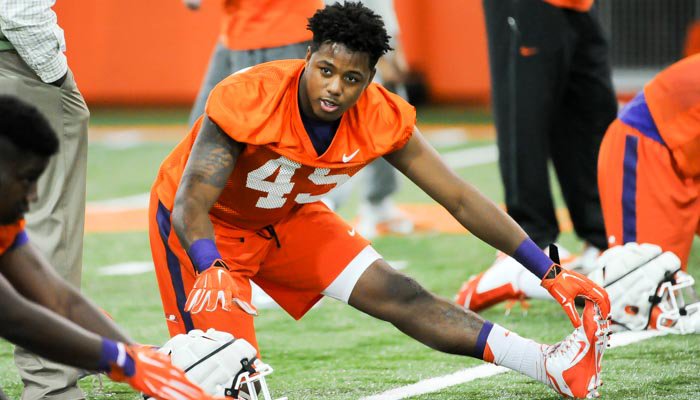 Clemson’s football coaching staff released the post-spring depth chart Friday, and when you look at the first team there were no surprises. In fact, the depth chart looks like the one we wrote about at the end of spring practice.

However, to tell the story of Clemson’s football team and to look ahead at what the 2015 season might hold you have to go beyond the starters and look at the players listed as second and third on the depth chart. We already know you have to be seriously deep to make a run, and while the Tigers have the numbers and the talent, they will be young at several positions where depth will be a must.

The starters? They will be ok and I can’t imagine that any of the starting spots (except at safety where T.J. Green

Jadar Johnson
Jr. Defensive Back
#18 6-0, 200
Orangeburg, SC
View Full Profile are battling and at the corner spot opposite Mackensie Alexander

Mackensie Alexander
RS So. Cornerback
#2 5-10, 190
Immokalee, FL
View Full Profile ) will really be up for grabs.

Clemson’s two-deep features eight starters who are seniors, 11 who are juniors and five who are sophomores. No freshmen are listed as starters, but eight are listed as backups, including four on the offensive line.

This is the fewest returning defensive starters Clemson has had since the 1979 team, Danny Ford

While Clemson has just 10 returning starters from the offensive and defensive units combined, the 22 starters listed on the depth chart include 20 players who have started at least one game. Kevin Dodd

Cordrea Tankersley
Jr. Defensive Back
#25 6-1, 195
Beech Island, SC
View Full Profile are the only starters listed on the two-deep who have never started a game.

The 11 players listed as starters on offense have combined to start 93 games. Center Ryan Norton

All 11 of the players listed as starters on offense played at least 200 plays last year. Isaiah Battle

The players listed as starters on defense have combined to start 47 games. Eight of the 11 played at least 200 snaps last year.

So where are the hot spots to watch as we head into the summer and the beginning of fall camp in two months? It starts on the line. Both of them.

Joe Gore
RS Sr. Offensive Tackle
#73 6-5, 290
Lake Waccamaw, NC
View Full Profile . We know that offensive linemen are prone to injury, and it isn’t hard to envision two of the youngsters starting at some point during the season. If three are starting, things have gone horribly and terribly wrong. The good news for the offensive line is that center Jay Guillermo

Jay Guillermo
RS Jr. Center
#57 6-3, 310
Maryville, TN
View Full Profile is returning to campus in June, and he can provide depth at the center and guard spots if needed.

Martin Aiken
RS Jr. Defensive End
#53 6-2, 255
Smoaks, SC
View Full Profile ) behind Kevin Dodd. That’s two players who have never played a down of college football that will be counted on to provide quality snaps. They will have to grow up and grow up quick.

Ben Boulware
Jr. Outside Linebacker
#10 6-0, 235
Anderson, SC
View Full Profile at the WILL linebacker spot. The good news is that the secondary brings back a ton of experience and shouldn’t have to count on freshmen unless Mark Fields

Back to the offense – Trevion Thompson

Trevion Thompson
RS Fr. Wide Receiver
#1 6-2, 195
Durham, NC
View Full Profile is another freshman who will have to contribute at wide receiver, but we won’t know how many freshmen will have to play at the wide receiver position until Ray-Ray McCloud

The Tigers are talented. The Tigers are also young at a lot of key spots. The story of the 2015 season might not be about Deshaun Watson

Deshaun Watson
So. Quarterback
#4 6-2, 205
Gainesville, GA
View Full Profile or some veteran – the story might be if the kids can help enough to keep Clemson in the national picture all season.