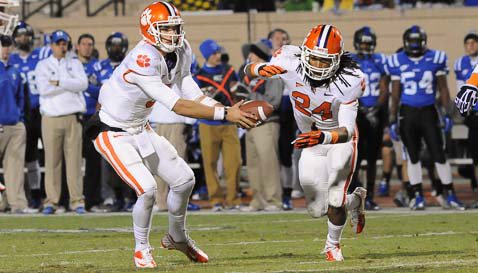 The Clemson Tigers are built to make a run at a championship in 2013, but might also be poised for a repeat run in 2014.

Clemson fans are familiar with senior quarterback Tajh Boyd, talented junior Sammy Watkins and an ever evolving offensive line. The defense showed signs of improvement in the bowl win over LSU, and defensive coordinator Brent Venables has stated that he has seen even more improvement this spring.

Yes, the Tigers will lose the services of Boyd, kicker Chandler Catanzaro and senior running back Rod McDowell and possibly Watkins. Yes, the defense will lose a few key players. But this will be a team in 2014 that will return a bevy of talented players, players that will also have the added experience of 2013 and whatever possibilities this season holds.

First off, let’s take a look at what will be lost – to graduation - on the offense:

That does not include wide receiver Sammy Watkins, who will likely be high on the NFL draft boards next spring and could decide to forego his final season of eligibility.

On the defensive side of the ball, the Tigers lose even fewer players:

Defensively, the Tigers will lose just three players that are likely to see significant snaps in 2013 in Robinson, Shuey and Christian. That’s right, Clemson’s entire talented defensive line will be back in 2014 unless someone like defensive tackle Josh Watson or defensive end Corey Crawford has the kind of breakout season that has NFL scouts drooling.

Offensively, of course, the challenge will be in replacing Boyd and perhaps Watkins. I happen to believe that one of the freshman running backs – either Tyshone Dye or Wayne Gallman – will come in this season and earn significant carries and will help bolster a backfield that will also return Zac Brooks and D.J. Howard.

The receiving corps will be in good shape with the continued emergence of players like Germone Hopper, Charone Peake and Martavis Bryant. The team is building depth on the offensive line, even though the loss of Shatley and Thomas will sting.

To make a long story short – if the Tigers can find the heir apparent to Boyd in either Stoudt, Kelly or even incoming freshman Deshaun Watson and can find replacements for the two linemen, the offense won’t miss too much of a beat. And with a defense that should continue to get better and better, Morris’ offense won’t have to score 40 points a game just to get a victory.

Defensively, the Tigers are beginning to build depth and should be able to handle the loss of Shuey, Christian and Robinson, leaving the big question mark for 2014 in the kicking game.

Will Ammon Lakip make it back to the team this fall? Can kickoff specialist and punter Bradley Pinion handle the job for one season? Or will the coaching staff go out and get a kicker this next signing period?

Whatever happens, don’t write off what will be a talented, more-experienced and solid Clemson team in 2014. Next season might indeed be the year, but 2014 won’t be far behind, and that is what good programs do. They don’t rebuild, they simply reload.