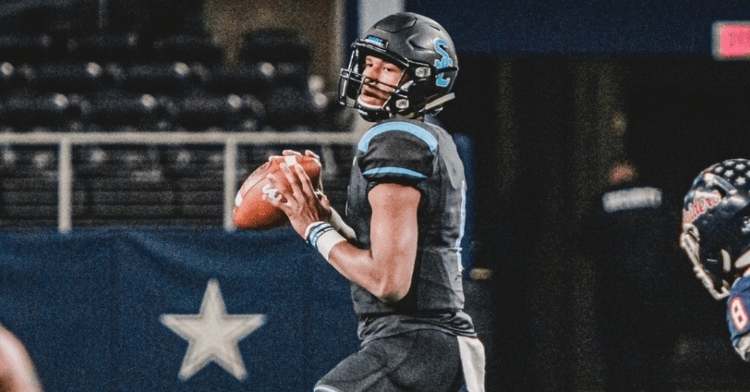 The Clemson coaching staff is taking its time with quarterbacks in the 2021 recruiting class, but one Texas signal caller stays in contact with the Tigers.

Quarterbacks coach Brandon Streeter is taking his time in evaluating the next wave of quarterbacks, and the only known quarterback offer for the class is held by Caleb Williams of Washington, DC, and he could be Oklahoma bound. One prospect Streeter has taken a more than casual interest in is Kyron Drones (6-2 195) of Pearland, TX.

“We still keep in touch, and they just say as soon as the NCAA lets people back on visits, they are going to get me up there,” Drones said. “He said I’m a leader and a winner and he likes the way I carry myself on the field, how I like to extend plays and I have an arm. He just said I’ve got to get to the school and throw in front of him.”

Drones had planned to visit Auburn March 25th and Clemson three days later. Those visits were canceled and not yet rescheduled. He’s hoping things will return to normal soon, so he can get the opportunity to show Streeter what he can do.

“I think it’s a good opportunity,” Drones said. “I didn’t really think I would even get that because I just started with this offense. It’s just a big opportunity for me and that’s why I want school to get restarted so I can have spring ball so they can see me.”

Drones has offers from Pitt, Vanderbilt, Indiana, TCU, Ole Miss, Auburn, Northwestern, Arkansas, Southern Miss, Utah State, and Houston. An offer from Clemson would certainly change up the inner-workings of his recruiting.

“They would be high on my board, like top schools for sure,” he said.

Drones also has Clemson among his favorites along with TCU, Auburn, Arkansas, Vanderbilt, and Northwestern. His only visit thus far has been to TCU. He wants to make his decision this summer and he will graduate early.

In the 247Sports composite, Drones is a 3-star rated prospect, the No. 18 dual-threat quarterback in the country and the No. 77 prospect in Texas. According to MaxPreps stats, last season Drones passed for 3390 yards, 46 touchdowns, and 10 interceptions. He also rushed for 825 yards and 18 touchdowns.