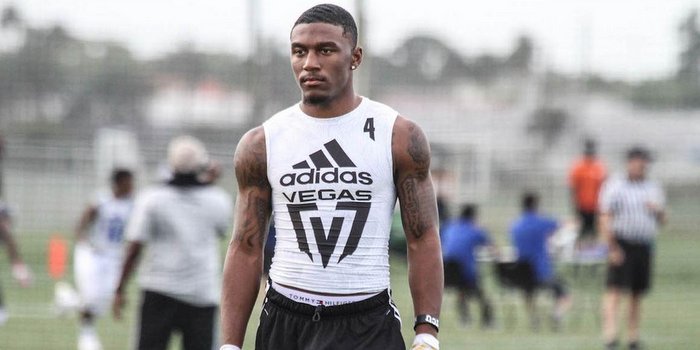 The Clemson coaching staff began to work the fertile recruiting grounds of Texas with the arrival of former offensive coordinator Chad Morris in 2011, and while that work hasn’t resulted in a commitment, it hasn’t stopped the defending national champs from establishing a presence in the Lone Star State.

The latest offer to go out went to 2018 athlete Taye Barber of Cypress (TX) Cypress Springs, who is quickly building a relationship with defensive backs coach Mickey Conn and defensive coordinator Brent Venables.

“It was amazing. I was so speechless and excited,” Barber told TigerNet.

Barber said he feels like he knows a few things about Clemson, but the only way to truly delve into what the Tigers have to offer is to make a visit.

“They are in the ACC and the usual things that people know about Clemson,” he said. “They have filled me in on a lot of information. I just can’t wait to get to campus and see for myself.”

One former Texas prospect – Dylan Sumner-Gardner – rode the bus from Texas to Clemson for a visit, but Barber hopes to make the trip with his mother.

“I definitely have high interest in Clemson,” Barber said. “Me and my mom plan on visiting in the summer. I love their drive to win the national championship and their family culture. They said I am a freak on the field and they love how versatile I am and my passion for the game. I can’t wait to get up and visit.”

The Clemson coaches see Barber as a defensive back, and Barber said that is why he is communication with both Conn and Venables.

“I am beginning to build a relationship with both coaches,” he said. “They are both just fun, funny, cool and loving guys. They always keep it real and have this drive to win football games and championships. They push that family part, and that is something I am looking for in a program, so I like that.”

However, he was a Clemson fan this past January when Clemson knocked off Alabama in the National Championship Game. He also had the same reaction as most Clemson fans when Hunter Renfrow caught the touchdown pass from Deshaun Watson with one second left on the clock, propelling the Tigers to a 35-31 win.

“I was watching the National Championship game. I was standing up the whole game, and I was rooting for them,” he said. “I went crazy when they scored during the last seconds.”