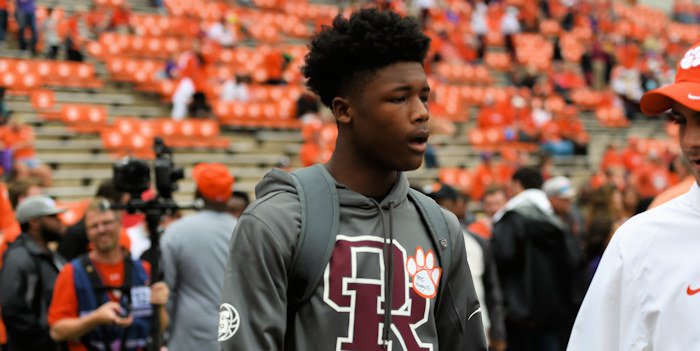 Tee Higgins made up his mind he was going to show out at Sunday’s Nike The Opening Combine Charlotte, held at Mallard Creek High School. Show out he did, earning an invitation to The Opening in Beaverton, Oregon in early July.

The Oak Ridge (TN) 2017 wide receiver is one of the top receivers and players in the nation for the next recruiting cycle, but he wanted to prove he’s worthy of the hype while going head-to-head against some of the region’s top talent at the regional.

Higgins told TigerNet he felt like he accomplished all of his goals.

“It felt really good to hear my name get called,” Higgins said Sunday. “At the end of the day and knowing that I had earned an invite to The Opening made me feel like I accomplished what I wanted to do. I went out there with the goal of getting the invite and being able to go to the Finals.”

Higgins said he knows he can play with anybody in the country.

Higgins was once a Tennessee commitment but de-committed from the Volunteers a few months ago while exploring other options. Many think that it’s a two-way battle between Tennessee and Clemson for Higgins’ services, and he admitted that those are the two schools he hears from the most.

However, he’s keeping an open mind while listening to what the Clemson coaches have to say.

“Right now, I'm just keeping an open mind and keeping all of my options up at least through the summer and until I got to Oregon for The Opening,” he said. “I hear from them (Clemson) a lot. They don't stand in any specific order, but I like them. They like me. The commits are really hard on me, too, trying to get me to commit.”

Clemson commit Amari Rodgers is one of Higgins’ best friends, and offensive line commit Blake Vinson told TigerNet he talked to Higgins quite a bit Sunday about the Tigers. Higgins said he also hears from the Clemson coaches a few times a week.

“Clemson is all about family,” he said. “They tell me all the time about how I would fit into the offense and how they can get me ready for the next level. I like Clemson a lot, but I also want to visit other schools like Michigan and Florida St., just to see what they have to say.”

Higgins is a two-sport star at Oak Ridge, and he admitted that he would like to play both sports on the collegiate level. As of right now, he hasn’t heard from Clemson’s basketball coaches.

“It's actually big. I actually want to play basketball through college,” he said. “I haven’t heard from their basketball coaches or talked to them, but I definitely want to pursue basketball.”