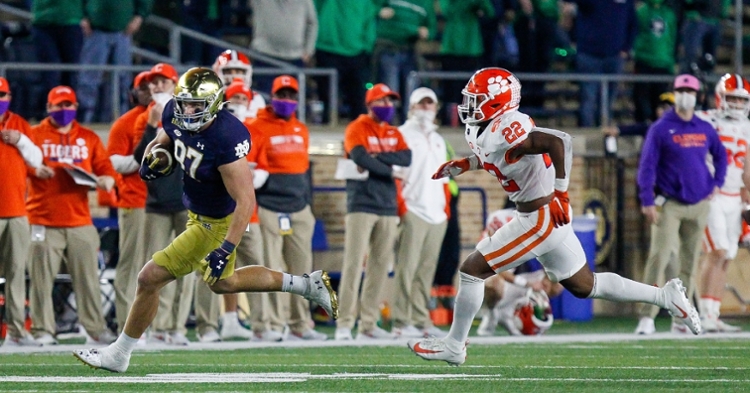 Simpson got caught on a wrong angle this play and he vows better moving forward. (ACC photo)

Asked about a play where he took an admittedly bad angle and missed a tackle opportunity, Trenton Simpson vowed to get back to the basics in practice over this week -- and that it wouldn’t happen again.

Simpson’s athletic ability is undeniable as a former 5-star prospect but you can also see him learning on the job after playing primarily running back at Mallard Creek (NC). With starting strongside linebacker Mike Jones Jr. out due to injury, Simpson made his first career start in the top-4 showdown at Notre Dame last weekend.

He registered seven tackles, 0.5 for loss, over a career-high 75 snaps in the 47-40 double OT loss. Simpson says he was having the time of his life, and that appreciation for the game even goes back to the locker room.

“Even when I put on my pads and it's time to go play and I look at my last name on my jersey -- I smile,” he said. “But as I was playing that game and just the way it happened, I was just happy to be out there and I'm proud to see how I'm performing now and taking advantage of the moment. Going to Notre Dame and seeing the stadium was very nice, but once it was time to get on the field and it was time to play, that kinda washed out of my brain and I was just playing.

“It was moments in the game where, man, I was just excited about the plays being made and my teammates were making plays. It was just a fun game for me. Win or loss, I learned a lot from this game and I did have a fun time.”

Simpson, who stands 6-foot-3 and 225-pounds, played 27 snaps in coverage and rushed the passer 16 times according to Pro Football Focus, showing the trust that’s building between him and defensive coordinator Brent Venables.

“He watched me a couple times in one-on-ones (in practice leading up to the game),” Simpson said of covering wide receivers. “They've been working on that with me since I got here because that's something new to me. I've been working on that technique every day in practice. He definitely had to trust me and he had to see me do it against our best receivers in practice in one-on-one drills in practice and things like that to trust me enough to execute in the game and make sure no one gets the pass off.

“My knowledge and confidence now has just increased a lot. When I go out there now, it's getting back to getting comfortable and starting to feel more like practice. Being in the swing of things and being able to talk to my teammates while I'm on the field. I'm getting very comfortable in these last two games under my belt now.

“I feel like I can go out there confident now and comfortable and feel great now playing in front of teams and also stages like that.”

Venables holds him and the ever-increasing players down the depth chart playing this season to a high standard.

“In the meeting room and on the practice field, Coach V holds us to the same standard,” Simpson said, “even more than the older guys to make sure we're prepared so if someone does go down -- we can step in the game and don't be fazed by the moment and go out there and handle business just like we were starters or upperclassmen also.”