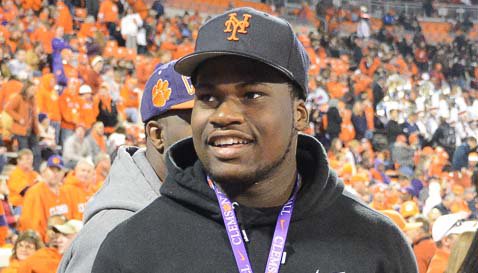 Dabo Swinney
Head Coach
View Full Profile watched former players play in Buffalo this past Sunday, and then took a trip to the Big Apple to talk to what he hopes is a future player on Monday.

Monday, he was in Brooklyn for an in-home visit with 2013 4-star prospect Ebenezer Ogundeko

Ebenezer Ogundeko
Outside Linebacker
6-3, 230
Brooklyn, NY
View Full Profile , the No. 1-rated player in the state of New York.

“He stayed about four hours,” Ogundeko told TigerNet. “My mom liked him a lot. We just talked about regular stuff. I like Coach Swinney a lot. He said we have a chance to win a lot of games if I come to Clemson, and we can win championships.”

Ogundeko said that Swinney eventually got around to talking football, and Swinney told him that he would be perfect for the “Jack” position, which is hybrid defensive end-linebacker position.

“He told me that I will have a great opportunity if I come to Clemson,” he said. “I really like that. I can play defensive end or I can play linebacker, but I like the Jack. I think that would be a good fit for me.”

Ogundeko said that his decision will come down to Clemson and Florida, with Florida head coach Will Muschamp getting an in-home visit next week. This weekend, he is taking a trip to Syracuse for an official visit. He hopes to make his decision at the Under Armour game.

Ogundeko visited Clemson for the South Carolina game, and said he had a good time with linebacker Kellen Jones and defensive end Corey Crawford.

“Those are great guys,” he said. “We had a blast. The atmosphere at the game was amazing, and I really liked the trip. It was fun getting to see Ryan Jenkins

Montravius Adams
Defensive Tackle
6-3, 281
Vienna, GA
View Full Profile . I also got to talk to all of the coaches, including Coach [Brent] Venables. He told me how he would like to use me at the “Jack” position.”