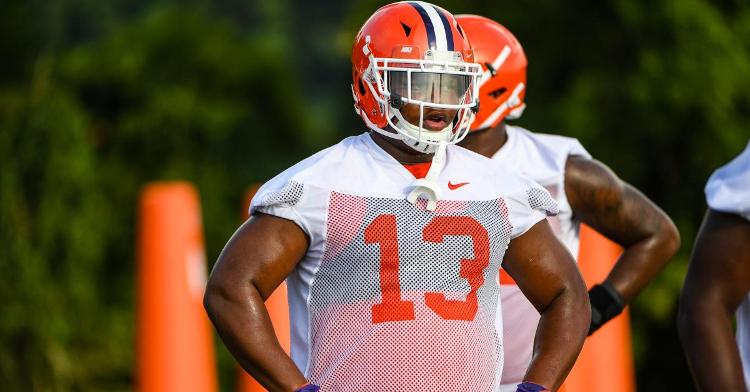 A valuable member of Clemson’s defensive front will be back for the Hurricanes.

Clemson and Miami face off at 7:30 pm Saturday night on ABC. The Tigers are currently a 15.5-point favorite over the Hurricanes. Clemson has won the last two meetings between the two programs by a combined score of 96-3.

Clemson head coach Dabo Swinney met with the media via teleconference Sunday evening, and the big takeaway is that defensive tackle Tyler Davis will be ready to play after missing the last two games.

Here are the highlights from the teleconference:

*Really good Virginia team. Presented strong challenge. First adversity they’ve seen. Lot of positives on tape but a lot to correct and teach and evaluate and grow from. Swinney said their best football is definitely in front of them. The Tigers got smacked in the mouth but they responded and lot of positives to take from it.

*Very pleased with special teams for the third game in a row. Defensively played better than last year (vs. Virginia) but so much they have to improve like fundamentals and space tackling. Disappointed in the last drive of the half with the eyes and tackling, but he has no doubt his team will respond.

*The Tigers weren’t very efficient on first or second down on either side of the ball, but everything he saw on tape is very correctable.

*Healthwise in a good spot. Only one that would be out is Darnell Jefferies (unspecified reason). Tyler Davis was missed. He was ready to play and followed Coach (Todd) Bates around like a lost puppy. However, Coach Swinney felt like he needed to be held one extra week. He actually practiced last week but Swinney felt like one more week would do him good.

*Miami is fast and confident. He saw some of the UAB game and some of the Louisville game and some of the FSU game on TV. He is very familiar with OC Rhett Lashlee and says that QB D’Eriq King is a difference-maker. The Tigers will have to play well. They usually don’t pick bad matchups for GameDay, so this will be a good one.

*Xavier Thomas had a death in the family last week. They wanted to dress him last week but he missed the Friday COVID test and couldn’t be on the sideline. They worked him on scout team last week and it’s the first time he has done a lot of football work. They hope to get him back out there rolling this week, and whenever he is ready he will be a factor.

*Justyn Ross has been doing almost everything and will go back to Pittsburgh for another checkup in December. He has been back lifting weights and is doing great.

*Mario Goodrich played 22 snaps and graded well. Missed a lot of camp with injury and has missed out on some conditioning stuff. It has been a while since he has played and it’s hard to simulate a game in practice. Cornerback is a position of strength right now. Sheridan Jones and Andrew Booth had great games. Fred Davis is coming along and will be a special player.

*On the interior part of the offensive line, Swinney says they played great and got after Virginia. They had a few bad plays here and there but he can’t say enough good things about the OL.

*Miami’s King is very confident and is his own player. Going to be a heck of a matchup.