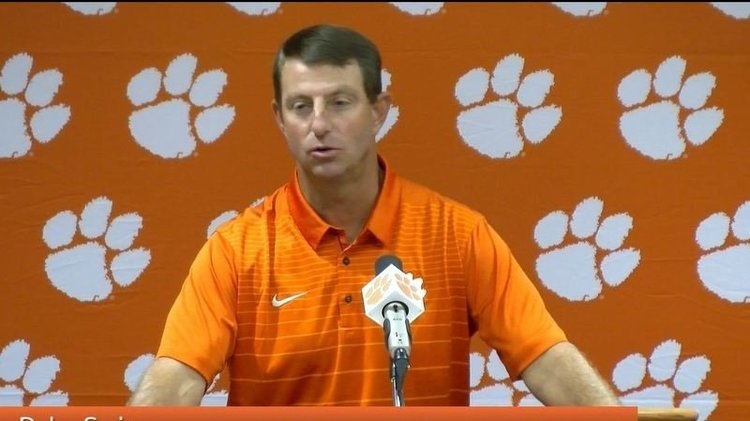 Swinney says the Tigers have a lot of work to do

CLEMSON – The national champs open the 2019 season under the lights and ranked number one in the country, but head coach Dabo Swinney says the Tigers have a lot of work to do and it has to start somewhere.

It starts Thursday night at 8 pm.

“It's a fun time of year. We're certainly ready to kick it off and get back on the field,” Swinney said during his weekly press conference. “We actually went out under the lights last night which was pretty cool preparing for an 8 o'clock kick. We've had a great camp, good game prep. There's only so far you can get without going and playing a game. That's the next step for us is going and playing an opponent and figuring out where we are. I'm excited to see us play and see what we need to do to improve and that's really our focus is to just get better one week at a time, one day at a time.

“It's that simple. This is a team that whatever happens Thursday night, we're going to have a lot of work to do. We have a long way to go but you've got to start somewhere. This is a great opportunity for us to be at home but at the end of the day, it's just one of 12. We've got to try to accomplish our first goal which is to win the opener. It's not going to be easy. This is an ACC game.”

Georgia Tech has a new coach – Geoff Collins – and a new offense. The Yellow Jackets will operate out of the spread after spending more than a decade running Paul Johnson’s option offense. As a result, Swinney doesn’t know what to expect.

“To be quite honest with you, we don't know a whole lot about Georgia Tech. Openers are really tough and they are always tough because we have more time to prepare for this one game than any game we every play because this has been looming for a long time,” Swinney said. “All summer long you're thinking about your opener and all that goes into getting a new team ready to play. We've got a lot of new pieces. We've got over 40 people who were not on the team last year, so we have a lot of guys that are getting their first experience to Clemson and then we have a lot of new roles - guys that were on the team but now they have completely new roles or more significant roles. There's a lot of moving parts and a lot that you have to cover to get ready for the first game and to get in the rhythm of the season.

“Openers are always tough and then you throw in an opponent like Georgia Tech that has good players and it's a whole new staff. That’s a challenge because we know a lot about Temple but we're not playing Temple. Last year we were going to play Texas A&M and we were studying Florida State and Notre Dame. It's a challenge and there are always lots of unknowns. There are going to be moments in the game where we have to figure it out and the same thing for them. They know a lot more about Clemson than we know about them so that's an advantage definitely for them. We've got see what their plan is going to be, make the adjustments and go from there.”

The unknown makes it an exciting start to the season.

“It's exciting, it's fun but it is a challenge for sure because there are a lot of unknowns going into this game for us - personnel-wise and schematically,” Swinney said. “Not only is it a coaching change but you have a complete philosophy change so you can't even watch tape and get a good feel for their personnel on the offensive side. This is a unique matchup.”

“The only guys that are out are Amari Rodgers and Bryton Constantin, who has been out all camp. Amari is doing great and looks awesome. He's really made drastic improvements and is doing a lot in practice. I feel good about his progress but he'll definitely be out this week for sure.

“Logan Cash was going to be out this year and had surgery but he has decided to withdraw from school and move on.”