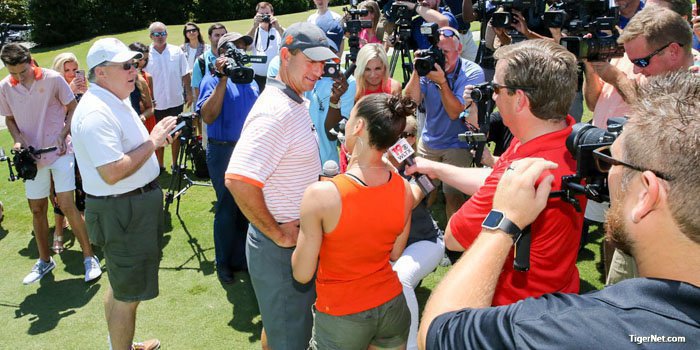 SUNSET – Clemson fans may be chomping at the bit to get the 2017 season started, but head coach Dabo Swinney says his team turned the page back in February.

Tuesday was Swinneys annual media golf outing, and he met with the media for a few minutes before the event on the putting green at The Reserve, saying now they have to figure out what kind of team they are going to be.

“We bring a lot with us. It’s an ongoing process when you build a program every year, it kind of bleeds into the next one,” Swinney said “Good or bad, you carry certain things with you, but it’s always starting over. This is media day, but we’ve been grinding since February. We started over back then. When we’re in mat drills in February and you’ve got Christian Wilkins (not that he did this) but he pulls up in a mat drill, you don’t have anybody over there going, ‘It’s okay Christian, you were an All-American last year or we won the national championship.’ It’s a bunch of competitive people. We moved on back in February and turned the page and had a good spring.

“We’re in the process right now of figuring out who we’re going to be and that’s ongoing. We’re almost finished with our transformation phase and then August 1 we start with our prime time. It all builds - the team’s identity, the personality of the team, the leadership of the team, the chemistry, the depth, new rolls. All of that stuff is still kind of coming together and I don’t think you really ever complete that until you get to that next phase and you start playing and you get some games under your belt. Throughout the course of the season is when you really see the identity of who you’re going to be. That’s the fun part.”

On if he worries about preseason rankings and predictions

“I don’t. We had a meeting with the team yesterday and I told them that all of this pre-season stuff, I know it’s necessary and it’s awesome to be able to have a job where people are really interested in it and everybody is excited about a season to come, that’s the cool part. But for me, when this is what you do and you’re dealing with young people, it’s just such a waste of time for my players to worry about any of that stuff because it just doesn’t matter. The preseason stuff is all based on who left, potential and what other people think and none of that really matters. What matters is what we think, how we prepare and how we develop and what we’ve done since February. I always tell them we’ve been picked number one in the league and we’ve won it. We’ve been picked to not win the league and we’ve won it. We’ve been picked to win the league and we’ve lost it. We’ve been all across the board. We had a streak of six years in a row where we exceeded our preseason ranking.”

On the questions surrounding his team

“On the personnel side, we’ve got some legitimate questions on paper that are good and fair question. Last week, I spent the whole day talking about who’s not at Clemson anymore. There was very little talk about who’s here. I think those are fair things. One guy said we’ve lost 78-percent of our offense - Gallman, Leggett, Deshaun, Mike - what do you do? I’d say we start right there and it starts with the quarterback and we’ve got to figure that out. The good news is we’ve got good players. We’re not choosing from the best of the least. We’ve got competitive, proven winners, great kids, highly intelligent young people that all want to be the job and they’ve all got high character, so somebody is going to win the job. I don’t know how it’s going to play out. We’re going to put them to work and it’s exciting because I know that competition brings out the best. Somewhere along the way, it will all play itself out. It might before the season, in the middle of the season or at the end of the season.

“We have guys that are capable of going to win for us a quarterback and it’s going to be more than one guy. Whoever wins the job, we’re going to have good backups. It’s the same thing at receiver. Mike Williams is gone. We’ll Mike Williams didn’t play the year before and we kind of figured it out and this year will be the same things. We’ll have guys emerge. Tight end - Jordan Legget - the last couple of years, what a great player. There’s a lot of production at the tight end position that’s got to be filled. I feel good about our guys but we’ve got to go do it. The biggest challenge going in is filling the void of that type of production that is gone. It’s exciting because I know we’ve got the pieces there. We’ve got the ingredients to be just fine.”

“One of the biggest differences between this year’s team and last year’s team, is we’re going to much more balanced at that running back position, much more able to play guys a little freer. It’s a lot we ask of those guys, especially in the protection part of it. You’ve got Adam Choice coming off of a knee injury who is trying to regain his confidence and get back going. Then you’ve got C.J. Fuller, who we felt like was going to go have a good season that as it played out had a really good year for us and emerged. He’s a guy that nobody asked about last year, but his coaches thought he was heading in the right direction. Wayne Galllman was the alpha.

“That’s the way it was it wasn’t going to change because Gallman wasn’t going to let it change. The good news for those guys is they all know what it looks like. Every position on our roster, they’ve had a model in there. You want to know what it’s supposed to look like? Here it is. Kendall (Joseph), Tre Lamar, Shaq Smith, you sat in a room with Ben Boulware, that’s the way it’s supposed to look. You quarterbacks, you guys all sat there with Deshaun Watson and Nick Schuessler, this is what it looks like. This is the commitment, the preparation. Same thing at tight end. They sat there with Jordan Leggett. Same thing at wideout with Mike Williams and Artavis Scott. Same thing in that secondary watching Cordrea Tankersley and Jadar Johnson.”