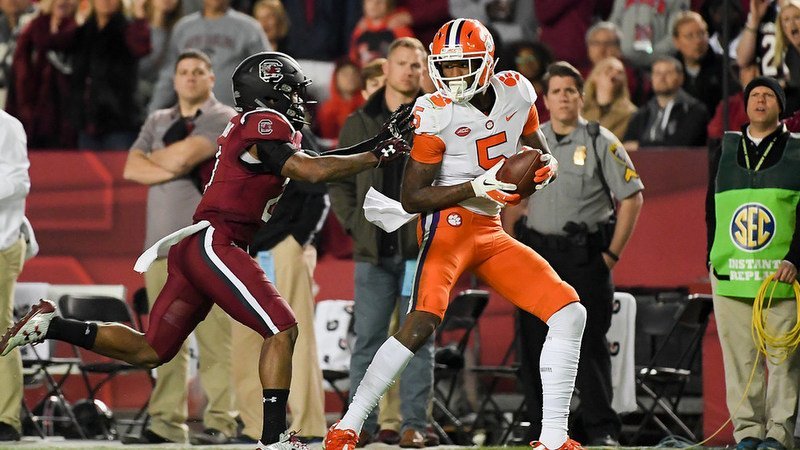 The Tigers and Gamecocks play this weekend at 7 pm

It doesn’t get any better than rivalry week in the Palmetto St., and Clemson head coach Dabo Swinney is almost as excited as the fans.

"Means the same to me that it means to everyone else in this state - the state championship,” Swinney said Sunday night. “It would mean we were 12-0 if we won. You live with this one for 365 days. We can't be 12-0 if we don't take care of business this week. This is a goal of its own, a season of its own."

The Gamecocks have been playing well offensively, according to Swinney.

“I've had a chance to see them play a couple of times this season,” Swinney said. “We're diving into them tonight. We got a late start getting to the tape because of some official visits this weekend. From what I have seen, they're playing with a lot of confidence. They're doing a good job of getting their playmakers the ball. They're good up front. Jake Bentley has a ton of experience. He's a very savvy and knowledgeable player. A really good offense that we need to prepare for."

If the Tigers hope to win, the wide receiver group has to correct the nine drops it had in Saturday’s win over Duke.

“It is just fundamentals and not finishing plays with their eyes. But we certainly are not worried or anything like that,” Swinney said. “Guys will go back to work and they know what they are capable of doing. It was just one of those nights.

“It was just one of those nights where we just had a rash of them. As much as we throw the ball and spread it around, sometimes you can have that. We will move on to the next one and get back on track.”

"I have no idea. Might be that 0.8 yards per carry in the first half."

“Matured a whole bunch. Had all the talent early on but didn't have the focus that he needed to have in order to be great. He was kind of casual with preparation. Great kid. Matured and has gotten more serious in order to be a better player. He has always been one of the most athletic an physically gifted players. He has grown up."

"He did a nice job. We had some guys kind of banged up. I thought he did a good job. It was a good game for him to get in there. He has put in a lot of work. I like how he responded. Brent was comfortable putting him in there."