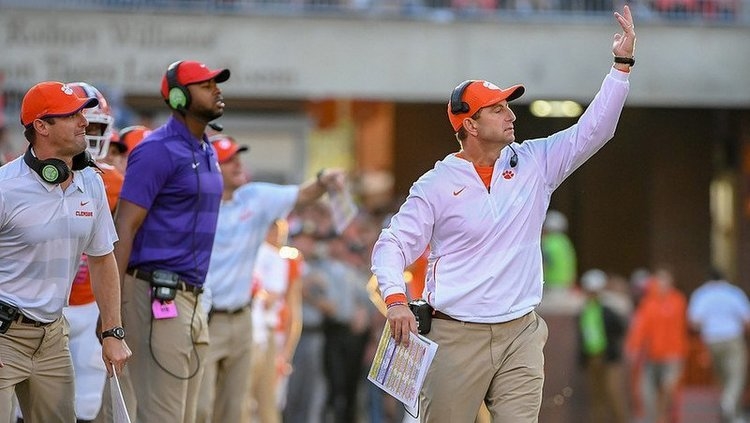 CLEMSON – College programs don’t have the luxury of working out the kinks during preseason games, so the full scrimmages allowed by the NCAA are important.

“We’ve got 19 days to get ready and this was our first preseason game. This is the best we could do to simulate the game and to get our guys ready,” Swinney said. “We don’t have any other way to do it, and we really only have two true preseason games, if you will. We do have a third, kind of situational deal, but it’s very controlled. Today and next Thursday are our true, preseason-type games. Today was about just seeing where we are. Put the thermometer in there and see where we are.”

Swinney said his team is right where he wants it to be.

“We’re right on schedule, don’t need to turn it up or turn it down. We exposed some guys. Some guys, they think they got it, and then they get exposed a little bit when you get into a live, gameday type of situation with officials, ACC refs and all that,” Swinney said.

“It was a good day, I mean there was some give and take on both sides of the ball. The offense just exploded out of the gate and then they faded. I thought the defense started slow, but then they finished well. There was good and bad on both sides. We had some sloppy penalties that we need to clean up on both sides. Fourth-and-1 on the goal line and lining up offsides, we had a corner line up offsides, we’ve come off the sideline and a guy lines up wrong and busts the play. Just some mental-type things. But again, it’s the first day. We get everybody off the field to try and simulate that real game environment.”

Both sides had their moments.

“So, a lot of good things, we made some big, big plays on both sides. I’m anxious to go watch the tape and really study. We got all three groups a bunch of work. We got a lot of functional talent, and we just got to create the functional depth, because there’s a difference,” Swinney said. “I like the guys that know how to play the game from an athletic standpoint, but we’ve got a lot of coaching to do off of this tape. I don’t have any doubt that we’ll progress from it if everybody can see it, take the right ownership of it, and go apply it.

“I always say that some days the defensive coordinator will come over here and be ticked, and the offensive guys are like, ‘Yeah, it was a good day. We made some plays, this and that.’ And then sometimes it’s kind of vice-versa, and that’s usually the way it goes. As the head coach, I can really feel happy because somebody can make a big 50-yard play and go, ‘Wow!’ Well, I coach the defense, too, and you go, ‘Crap!’”

“It’s not tight. BT Potter’s way out front. It’s not even close. Potter has been awesome. He missed his first two kicks today, and he’s one of those guys that has had an unbelievable camp. I think he was 19/20 going into yesterday’s practice. He missed a kick in two-minute yesterday, but it was a 50-something yarder. He’s been awesome. He looks like a different guy, and I wasn’t disappointed in him today. Again, he’s had such a great camp, and all of a sudden it’s just different out here. It’s just different. He comes out, we were able to move the ball down, and it’s 4th-and-3. I want to work on some field goals. We could probably go for it, but I want to work the field goals. We don’t make it, so he missed his first two. Just the mental toughness and the ability to stay focused and bring it from the practice field to the game environment is kind of the next step for him. He’s had an awesome camp, and it ain’t close. He’s really done an awesome job.”

“Joe Ngata has just been awesome. He’s getting better. Sometimes freshmen hit a wall as camp goes and he’s just gotten better and better. He has really had a great camp and had a good day today, taking advantage of his opportunities. Frank’s (Ladson) probably going to be out for the next couple of weeks, but he’s been having an awesome camp. He’s just got some irritation in his knee, just a little stuff we got to clean up in there. It’s the exact same thing Christian Wilkins had to have done before last year. So he’ll be back and ready to go, but Ngata has done an awesome job. Spec’s been really good, had a good camp. On the other side, Mario (Goodrich) flashes. It’s his first time getting those kinds of reps. Sheridan, Booth both flashing. We got a bunch of flash guys right now. Probably the most consistent right now has been Ngata and Tyler Davis. Just consistency as freshmen.”

Who stands out at corner?

“Corner? I like them. You’ve got AJ (Terrell) who’s just clearly the guy, and DK (Derion Kendrick) has kind of separated himself, even though he’s been on ice for a bit. Mario, as I said, he’s so much improved. Then Sheridan and Booth are as advertised. Really talented freshmen. They’re freshmen, they have a lot to learn and there’s a lot coming at them. And they’ve got their hands full with what we can do offensively. But they’re coming. It’s a really good group. LeAnthony’s (Williams) made strides. I’m really pleased with where we are in the secondary. When it’s all said and done, I think they’ll be one of our better groups.”