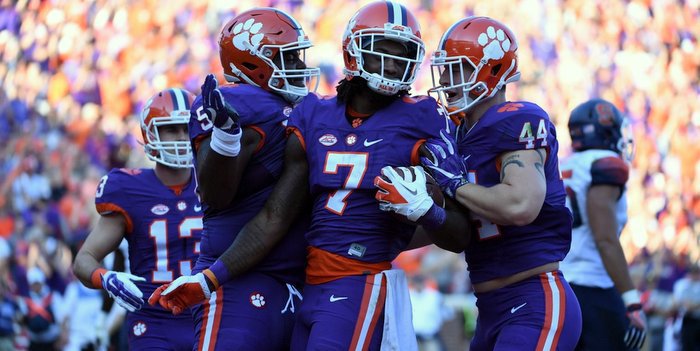 CLEMSON – Fun was the name of the game Sunday.

Clemson head coach Dabo Swinney told the media during his Sunday teleconference that watching the game tape of Saturday’s 54-0 win over Syracuse was fun, and that the fun was in the winning. The Tigers dispatched the Orange to improve to 9-0 overall and will host Pitt this weekend at 3:30 p.m.

“Obviously, a great performance by our team and a really fun tape to study and grade. I'm just very proud of our staff and the team for getting themselves ready to go,” Swinney said. “It's definitely fun to win, but it's pretty special when you can play a clean game like that and really dominate - a shutout, 50-plus points, no turnovers, only three penalties, a score on defense, no sacks, only three penalties. It was just a really dominant performance. The credit goes to our guys for getting themselves ready - tremendous preparation, focus and intensity all week long. I just loved the look in their eye all week as we got ready to play this ballgame. I'm just really proud of how they played for four quarters. It's something we talked about.”

The Tigers held Syracuse to under 300 yards of total offense and pitched their second shutout of the season.

“Defensively, we shut out a very tough offense. This is an offense that was playing with some confidence, coming off of a couple of weeks to get ready for us, coming off of two big wins,” Swinney said. “The turnovers were huge. I thought Ryan Carter really sparked us early. Anytime you can score on defense it was big. We played much better with our technique on the back end, especially knowing these guys were going to come in and throw it 40 or 50 times. We played a ton of people. I'm really proud of all of the guys that played and the fact that we were able to maintain the shutout. Very few big plays - they had one run and then one comeback on the sideline. They only had seven yards per completion. A dominant day defensively. They set the tempo for us.

“Offensively, it was one of the best games we've had. A tremendous half for Deshaun (Watson). We had four 80-plus yard drives. 565 yards, 54 points, good balance as far as being able to run the ball and throw the ball, no turnovers was the key. It's the most explosive plays - 15 big plays - we've had all year. We averaged almost 14 yards per completion. Good to see the balance and explosiveness. Threw the ball down the field very well. We missed one but did a great job with the others. Third down was good. Fourth down and redzone - all touchdowns but one time, but we did score 100-percent, and then no sacks. The biggest thing offensively was Mike (Williams) had a couple of drops but he had some great catches, as well. It was just a clean game. I'm just really proud of everybody and the contributions all across the board.”

“It was just a fun game to watch, proud of our guys. The energy was awesome. Our crowd was great. We're excited about having another week. A big, big week with a lot going on - our senior day and trying to get a tenth win and trying to win the division. Just continue to do what we do. We have fall break tomorrow and Tuesday, so I'm really excited about that. Our guys will get a little extra rest and we'll have a little extra time for meetings to get ready for a tough Pitt team coming in here.”

“Injury wise, Deshaun (Watson) got banged up but he looked good today. We'll get him some treatment today and tomorrow and get him back in practice the early part of the week. Cornell Powell was the main guy. I'm really disappointed for Cornell because it was going to be a big day for him with us holding Ray-Ray (McCloud) and he tweaked his hamstring. We'll know a little bit more with him tomorrow as far as what we're looking at with him.

“And then Denzel (Johnson), the same thing, he would have gotten a lot of opportunities, but he tweaked his groin area so that limited him. Chad Smith kind of got banged up a little bit but finished the game. Everybody should be ready to go. We should get Ray-Ray back going this weekend and the same thing with Marcus (Edmond). We were able to hold Marcus. We were going to play him if we needed to, but we're just trying to get him back to 100 percent.”

*Jake Fruhmorgen - who missed Saturday's game with a shoulder injury - will be re-evaluated on Monday.

“Both of those guys got in there a little bit. The biggest thing is it was just a great experience for them. They combined together and kind of got the job done together. They've played. Tremayne played both sides and played 34 plays and Pollard played 57. They both did a good job. It was a great experience that will pay dividends in their development.”

“We just wanted to win, whether we won by three or by thirty. It was nice to play so many players, but we just wanted to play well. We just needed to win and that's the main thing.”

"Nick was our player of the game. He played very well. Deshaun was tremendous. That's by far his best first half. He was lights out in about every regard - decision-making and accuracy. Mike had a drop in there and then we had another deep ball we didn't hang on to. He was great. Nick just steps in - tremendous preparation. It was great - you don't want to see your quarterback get banged up but to see Nick go out there and to show the preparation and the work he's put in and to create that confidence was awesome. He finished the drive and we got a touchdown and then we had a 30-second drive before the half and then we come back out and pick right back up. He played really, really well and had great command of the offense. They guys continued to play at a high level around him. I was very encouraged by that. Kellly Bryant did some good things. Kelly doesn't have as much experience - this is his second year, but he's really improving. Every time he gets a chance to get on the field, the game can kind of slow down for him. Tucker did a nice job. It's good for his development."

Looking ahead to Pitt

"It will be a different challenge for our defense this week than last week. Very, very different philosophies as far as how they go about their business. Big challenge. This running back is very, very good and they do a great job with their play-actions built off of their running game. Lots of shifts and formations. A lot of option principles that force you in how you have to defend these guys. Totally different than last week. This team is going to run the football and try to create edges and make you play disciplined gap football and a lot of play-action off of it. We've got our hands full. He's a great running back. The quarterback is a good player. He was a starter at Tennessee and a transfer. They've got the number one guy in kickoff return. I know they didn't play very good this week, but we'll get their A-game, we know that."