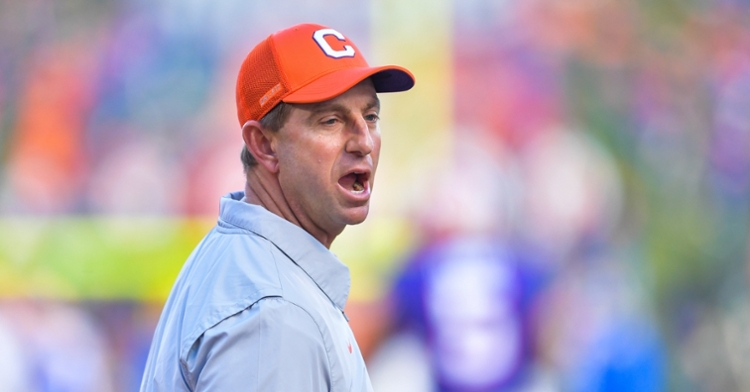 Swinney reacts during the win over Pitt. (Photo courtesy ACC)

Throw out the records when it’s a night game in Lane Stadium with the elements playing a role.

The Hokies are in the throes of a three-game losing streak, including heartbreaking losses by three points to Liberty and by a point to Miami. However, Swinney said the Tigers are in for a challenge that includes the weather, which is forecasted to be cold.

“We are looking forward to it, because this will be a different type of challenge. It's a night game, Blacksburg, the weather, snow, rain, you name it,” Swinney said. “To me, that is a great challenge and something we look forward to. Fans may look at a record and be quick to judge somebody but that's not what we do as coaches. You look at this offense, they are ninth in the nation in rushing. They are fourth in the nation in yards per carry. They are getting almost six yards a carry. Their quarterback is second in the country in all-purpose yards. It is a real challenge for our defense this week as far as schematically with what they do.

“They are well-coached and have a great scheme. It is option football with a guy who can throw the ball really well. A bunch of misdirection and eye-candy to go with it. Every run they have, they have a pass off of it. All the tricks, you name it, they've got it. But it all starts with the running game. It's a veteran offensive line. It is one of the more physical groups we have seen. But it all starts with the quarterback. He is a dangerous player and that will be a great challenge.”

The Hokies are struggling defensively and have had to deal with injuries, opt-outs, and COVID on that side of the ball with that.

"Defensively, Virginia. Tech has had a long history of defensive football,” Swinney said. “They are a 4-3 front. They have been kind of up and down with some of their personnel, but they have had an open date so I am sure they are getting some guys back and be as healthy as they've been in a long time. They get after you up front. They are about a 50-percent blitz team. They bring a lot of pressure.

“So we have to do a great job of matchup up on that side. We are looking forward to it and continuing to improve our team. We did some good things last week that we can build on but still plenty of mistakes that we can learn from. We are looking forward to getting some of our guys back. We came through the Pitt game really well and we are still moving in a good direction as far as the health of our team.”

“It was a big deal, definitely (the rest). It's the nature of where we are this year personnel-wise,” Swinney said. “They have had to play a bunch of snaps. We have had to play a lot of physical football. It is a tough game and a tough position especially when you don't have a good rotation. We are in a much better place now with some backups. We're just different than we were last year where we had some guys rolling in there (more frequently) with some of our veterans. We were a deep group last year. So no question it's a part of it. The open date for us was huge. Guys got fresh. I think we are in a good place right now."

The Tigers didn’t play at FSU two weeks due to a positive COVID test from a backup offensive lineman, but Swinney said he doesn’t spend time worrying about those tests this late in the season.

"I don't worry about it anymore. Early in the season you were a little freaked out about it,” Swinney said. “But again that's why we expanded the rosters. I remember that first game at Wake Forest, I was a little concerned. Ok, here comes that text. It just became a part of our deal. Now, it doesn't even faze me. The last positive we had as a player was that Friday in Tallahassee. We don't have a lot of issues. Our guys have done a great, great job and have been committed. Everyone has been amazing as far as how we have mitigated things. It just is what it is. It's just like the injury report. As a coach, you can't dwell on it. You have to have the next guy ready to go."