Ajou works out in the afternoon session

CLEMSON – If it seems like almost every session of head coach Dabo Swinney’s high school camp has featured a big-time wide receiver, that’s because it has. Tuesday’s initial 2019 session was no exception.

Everybody from Charone Peake to Sammy Watkins to Mike Williams to Tee Higgins and Amari Rodgers have been a part of the Swinney camp process, and Tuesday’s session featured a few intriguing prospects.

Clearwater (FL) Academy International receiver Ajou Ajou, a member of the 2020 recruiting cycle, spent time with wide receivers coach Jeff Scott before the session and performed in the A group with both Scott and Swinney looking on.

Ajou visited Georgia Tech Monday, while Clemson coaches Tony Elliott and Jeff Scott have been by his school. It’s notable that Ajuo doesn’t have a Clemson offer, so it will be interesting to see if receives one this week.

Georgia is considered an early leader for Thomas, but he has ties to Virginia Tech through his mother. He plans to visit Alabama, Clemson, Georgia, Ohio St. and Michigan this summer. I spoke with someone close to Thomas who said that while some suppose there are early leaders, both parents are invested in the process and it’s too early to name anyone. This week’s camp could go a long way towards putting Clemson on the map.

*Class of 2022 wide receiver Clay Swinney is the third Swinney son to make his way through camp.

*Speaking of receivers – Higgins was helping out Scott but was in a walking boot. Rodgers, recovering from ACL surgery, looks to be ahead of schedule. Rodgers wasn’t wearing a brace and looked like he was moving well. I’ve been told he is attacking his rehab with a passion and that he could play earlier this season than people think.

*Repeat offender – A young running back out of Kingstree is making his 17th appearance at Swinney’s camp. Brian McAllister came to his first Swinney camp when he was in second grade and has made an appearance at both sessions every year since, only missing one session. That means Brian has attended 10 straight years and 17 sessions.

*Clemson great CJ Spiller spent a lot of time watching the running backs. Spiller is currently coaching track at a high school in the area, and I asked him if wanted to coach football. He said he wants to coach Swinney’s camp next and see how he does and go from there.

*I know that people have all kinds of conceptions and misconceptions when the sons of coaches receive offers and scholarships. I can allay any worries about recent safety commit Tyler Venables, son of defensive coordinator Brent Venables. 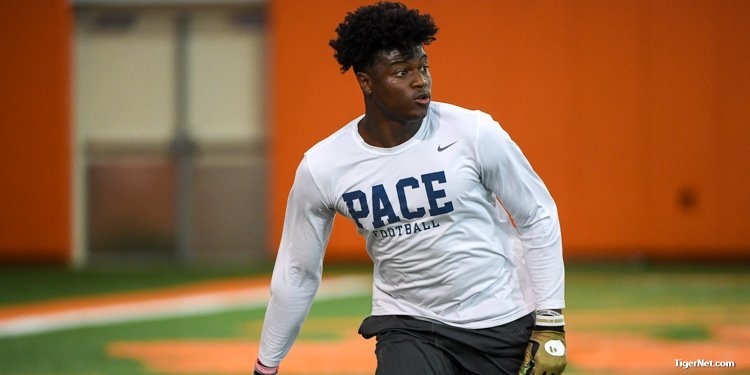 Jayden Thomas works out during a drill

Tyler was easily one of the top two or three players I saw, and his athleticism pops out at you. He’s quick, he moves his feet really well, is quicker in the backpedal than I would thought and has a sneaky-fast change of direction.

One Clemson staffer – another person who has been to every Swinney camp – said that Venables reminded him of Travis Blanks when Blanks first showed up at camp. Blanks was dominant that summer – repeatedly calling out a young Mike Williams in the 1-on-1 sessions – and it will be interesting to see how Venables fares when he goes up against some of the better wide receivers.

As another person told me – if Venables had a different last name and played safety at a place like Byrnes, he would be a 4-star with 30 offers.

*For the sake of time, I’ll get more into the tight ends after the evening session. However, the one guy who really stood out in the afternoon session was a 2020 prospect out of Richmond (VA) Collegiate School named Trey Boll. At 6-4, 215, he has room to grow and put on weight but he moved with ease and might have had some of the best hands out there. He drew the watchful eye of tight ends coach Danny Pearman on more than one occasion. Boll has smaller offers, but Pearman isn’t afraid to take a guy he thinks has potential (like Braden Galloway).

*More to come after the evening session.