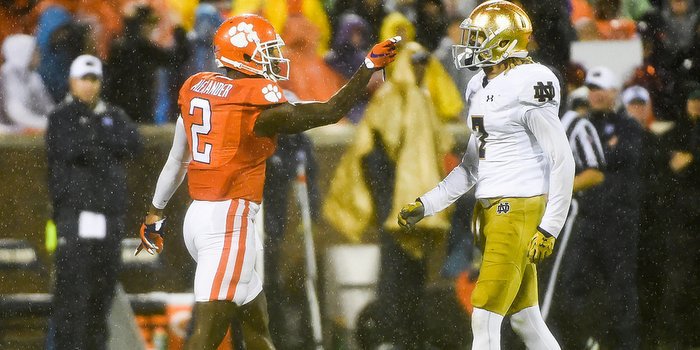 Alexander talked to Will Fuller the entire game

Dabo Swinney
Head Coach
View Full Profile with Clemson’s No. 6 national ranking? Not very. Swinney admitted during his Sunday afternoon teleconference that he doesn’t even know who was ranked sixth in last week’s poll.

That would be Notre Dame, the team the Tigers defeated 24-22 Saturday night in a soggy Death Valley. For Swinney, however, there is still a lot of football to be played and he isn’t concerned with polls or rankings. Not in early October. He also hopes his players aren’t worried about the rankings.

"I hope so. That's the thing about this stuff, especially with some of the media and television people. People just want to end the season after three or four games,” Swinney told the media. “It's like, 'Okay these teams are in.' I think it's funny. Every weekend is a season of its own. Just look around college football. I don't know who was No. 6 last week, but where are they now? You just have to go play the games. It's just irrelevant. It's great to know we are in the mix. We want to be in the conversation, but we've played just four games. We just have to keep our head down, keep chopping and find ways to win games.

“The goal for us is to win our division, get to the championship game and have the best season we can have. All in all I loved our approach all week in getting ready. It's just one of 12. It was a special moment but it's one of 12. It's good for our guys to know they can win. We found a way to win. Another thing that's good is we're 4-0 and we haven't come close to playing our best football. We can improve tremendously. Give Notre Dame credit, though. They are a great team. We have a team that can fight. We made two big plays at the end to win it. I'm proud of our team. We have to keep developing and improving.”

Swinney thanked the fans for being a big part of the win over the Irish.

“I want to thank our fans for a great night. A great atmosphere to play a college football game,” he said. “Tremendous job by our fans. "We won the turnover battle and we knew that was a key. We're back on the plus side of that for the year. We won the penalty margin. We're pleased with our special teams. We worked really hard over the last couple of weeks. It was good to see Andy Teasdall

Artavis Scott
So. Wide Receiver
#3 5-10, 191
Oldsmar, FL
View Full Profile had 120 yards on kickoff returns. The turnover we got on the kickoff coverage with Ammon Lakip

Mark Fields
Fr. Cornerback
#24 5-10, 191
Cornelius, NC
View Full Profile . We were 1-of-2 on field goals and we recovered the onside kick at the end. Tremendous job on snaps too.

"Defensively a great start for us. Third down was solid. We knew our rush defense was going to have to be huge. Our defensive front played really well for the first three quarters. Nine tackles for loss. The biggest disappointment was the fourth quarter. It's 21-3 and we gave up over 200 yards in one quarter. I don't know the last time that has happened. We gave up too many big plays, 12 of 16 yards or more. We let them back in the game. That was probably the biggest disappointment after playing three great quarters. They were all correctable, though. We made the last play. That was all we needed to win the game.”

Clemson’s offense got off to a fast start, but stumbled in the second half and he admitted the coaches got conservative in their playcalling.

“In that type of game there were a lot of people out there who felt we couldn't run the ball. We had 211 yards rushing.,” he said. “Our offensive line and tight ends did a great job. I thought we owned the line of scrimmage. To be able to run the ball when everyone knows you're going to run it, it's difficult to do especially in that type of game with those conditions. We were conservative with how we did things. The biggest positive was ball security. We had zero fumbles. Our backs did a great job. Deshaun Watson

Deshaun Watson
So. Quarterback
#4 6-2, 207
Gainesville, GA
View Full Profile did a great job. The biggest disappointment was four drops. We had three chances in the fourth quarter to put the game away and we drop a touchdown pass. We get an interception that we shouldn't have gotten. We can't let that ball get intercepted and then we missed a field goal. We should have been seven of 15 on third down.”

Injuries and players of the game

"Injury-wise we came out of it in good shape. Austin Bryant

Chris Register
RS Fr. Outside Linebacker
#45 6-2, 248
Browns Summit, NC
View Full Profile back. We should get them back in practice tomorrow. Players of the game were Shaq Lawson

Kevin Dodd
RS Jr. Defensive End
#98 6-5, 268
Taylors, SC
View Full Profile . Offensively it was our offensive line. I can't say enough good things about them. Hardly any mental errors and gave up no sacks. Our special teams players of the game were Teasdall and Jim Brown

What is the key for this program winning the games in the trenches?

"Just recruiting. We have recruited good players. Personally I think we made that turn in 2010. We didn't have a great season on the scoreboard but I saw the fruits of our labor taking root within the program. We lost five games by six points or less. We were in the process of establishing our program. The things that I saw in the locker room and in the practice room, I knew we had a chance to be successful. We recruited a huge class in 2011, a bunch of freshmen and that class went on to become the winningest class in the history of this school. Players have to buy in, you have to be good enough and you have to develop them. To me, I would say 2010 is when we were making a turn as a program. We have a good staff and we make good decisions."

Thoughts on the defense playing so well

"There is really nothing that I've seen that I didn't expect. We're just not as deep as we've been. Our first group can line up and play with anybody. We're just a younger team. We've got some young talent that isn't quite ready yet. We have to grow them up. There is a big gap between our first and second group in certain spots defensively. We have to get a little lucky until we have a chance to grow some guys up. The first group, what they're doing now isn't surprising at all. What's a surprise is how poorly we played in the fourth quarter last night. We just lost our focus and we have to get that corrected."

"We try to get some of these guys in there who we know will have bigger roles throughout the season. We trust some guys in certain situations. We've got some good young talent. This is a game of playmakers. If you get the ball to guys enough, you will have a chance to be successful. We had a great plan and we executed. We got up, our defense played great, we got up 21-3 and we didn't anticipate them getting over 200 yards in one quarter. We tried to play it safe. We have some young guys, though. They will pay off as we go through the season."

The play of Mackensie Alexander

"It's comforting to have great players anywhere. He's certainly a great one. He made a lot of mistakes, too. We have a lot of coaching we will be able to do. There were things where he didn't do his job. Shoot, you want as many great players as you can have. But there will be a lot we can coach him from off of this game. And he loves to be coached and wants to get better."

What can you do to get Charone Peake

"Biggest thing was opportunities. He only had two. One was a bad throw and the other was we took a shot. He's probably not going to get that ball but he has to keep it from getting intercepted. Going into the game we felt like it might be a big-time passing battle but we get hit with a hurricane and it was different. We got up 21-3 and it just became a situation where we wanted to challenge the O-line and running game. We're not worried about him. The least thing I'm worried about is throwing the ball. People were concerned about our offensive line coming into the game. They dominated and owned the line of scrimmage. Notre Dame knew we were running and we were still able to grind it out and go score. We've played just four games. He will be a big factor for us."

The play of center Jay Guillermo

"Really proud of him. Getting him back was huge. I didn't know he would be back. We're thankful that he was with us. He is having fun playing football. He has fun practicing. It's fun seeing him get back to the Jay that I know. Snaps were excellent. To be very efficient was a real positive. He did a great job. Really proud of Jay Guillermo."

"They're always a difficult opponent. This series has always been big and a tough game for both schools. We did spend quite a bit of camp time preparing for Wofford which runs the option. We had a chance to study Georgia Tech quite a bit in preparing for Notre Dame. We have a veteran first group on the defensive side. They know what to expect, but that doesn't make it easy. It'll be a difficult challenge. We'll bring them in tomorrow and put everything we've got into having a good plan."

Trash talking between Mackensie and Will Fuller

“We don't need that mess. We have to stay focused on what we're doing. Emotions are part of the game but you can't get so emotional that you get outside of yourself and risk getting a penalty. Let your play do the talking. Everyone is prideful and that's one of the things that makes him great. He's ultra-competitive. Just make sure you channel your energy."