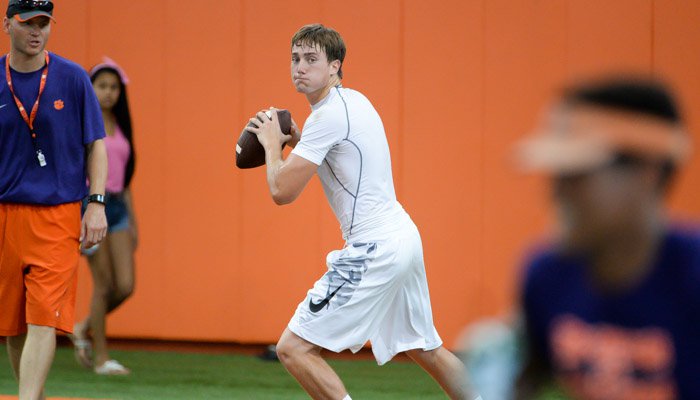 Cade Weldon is a 2017 prospect out of Tampa (FL) Jefferson.

CLEMSON – Clemson’s annual high school camp is in the books, but Sunday's session wasn't a low-key affair as several high-profile prospects made an appearance, including three new quarterbacks, a coveted offensive lineman and one of the state's top receivers for 2017.

Let’s start with the quarterbacks as three names made their way to Clemson Sunday – Cade Weldon, Jake Bentley

View Full Profile . Weldon is a 2017 prospect out of Tampa (FL) Jefferson and he has offers from South Carolina, Wake Forest, Kentucky and Miami (FL) along with some smaller schools.

He is, however, the son of former Florida St. quarterback Casey Weldon. Weldon played at Florida St. through 1991 and following that season he finished runner-up in the Heisman Trophy balloting to Desmond Howard of Michigan. Cade worked out with Cooper and Bentley, and he throws a really nice ball, especially on the medium throws.

Bentley - the 2017 prospect and Opelika (AL) quarterback - is the son of former Byrnes head coach Bobby Bentley, who now works with the offensive staff at Auburn. He has offers from Auburn, Cincinnati, Illinois, Miami, Vanderbilt and Wake Forest, among others. He is another pro-style quarterback, and every time I watch him I think he throws one of the prettier balls you’ll ever see.

Cooper started out the session without a brace, but quarterbacks coach Brandon Streeter

Brandon Streeter
Quarterback Coach
View Full Profile found the brace and brought it over to the 2016 Clemson commit out of Jonesboro (GA). Cooper continues to impress me, and we’ve seen him three times over the spring and he looks better each time.

The first time we saw him – at the Nike Combine in Atlanta in March – he looked like he was still favoring his knee and trying to regain that form. There are still throws where I can see it, but he’s definitely on the right track and competing in the 7-on-7’s and getting back to playing competitive football this fall will help as well. He was more than solid during the time I watched him Sunday.

Another quarterback we watched was 2017 prospect Patrick McClure out of Columbia (SC) Ben Lippen. He’s not on anyone’s radar as of yet – not that I can tell – but he competed almost equally with the prospects we saw Saturday.

Finally, San Antonio (TX) Reagan 2017 quarterback Kellen Mond is still on campus, but he didn’t work out today. We heard that he was going to take the full tour of the campus and facilities today before heading home. Head coach Dabo Swinney

Dabo Swinney
Head Coach
View Full Profile watched Mond closely Saturday, and I noticed that he throws one of the best deep balls we’ve seen at the camp.

Clemson’s coaches are high on Mond, and despite the fact that he’s in the middle of the some of the best football schools in the country, don’t be surprised if Clemson is high on Mond’s list if he winds up with an offer. Unlike a lot of the quarterbacks we’ve seen this week, Mond is a true dual-threat guy (again, reminds me of Deshaun Watson at the same age, just maybe not as polished as a thrower).

Jonah Melton
Offensive Tackle
6-5, 315
Mebane, NC
View Full Profile is a 4-star 2017 offensive lineman out of Mebane (NC) Eastern Alamance and already claims offers from Boston College, Clemson, Miami, North Carolina, N.C. State, South Carolina, Wake Forest and West Virginia, as well as several smaller schools. Melton was on hand for Sunday’s session, and while we didn’t get to watch a lot of his work I was impressed with his motor and strength.

The drills we watched involved pushing one of the iron sleds about 30 feet or so, and once Melton got his feet moving he flat out moved. When I’m watching young offensive linemen I go by what I’ve heard offensive line coaches tell me for a long time – it’s always good if they have big legs and big butts to provide a good base.

Another offensive lineman I really liked was – no surprise because he’s coached by Jamo Wilson – 2016 prospect Cade Stewart out of Central (SC) Daniel. It’s easy to see Stewart has been coached well, and he has an offer from Furman already on the books.

*We told you about Wale "Wally" Ogundeyi, who participated in the last session of Swinney's high school camp last Wednesday. He made a return trip for Sunday's final session. The 2016 prospect doesn't have any offers, but is intriguing because of his size and athletic ability. He has yet to play a down of organized football, so I don’t know that he would get a true scholarship offer, but it would be interesting to see if gets some kind of grayshirt or preferred walk-on offer from someone. 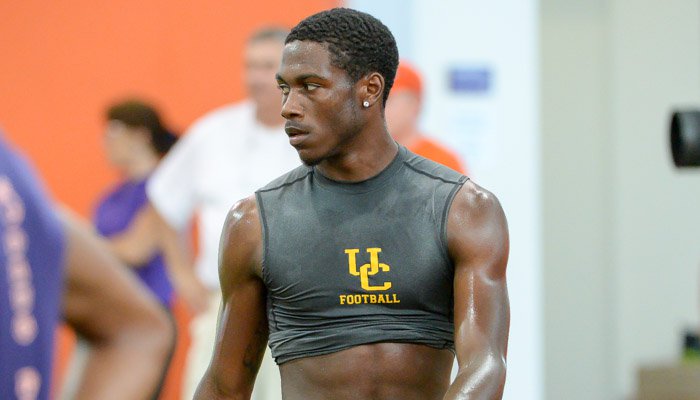 *The last group we watched was the receivers, and 2017 Union (SC) wide receiver Shi Smith

Jeff Scott
Co-Offensive Coordinator / WR
View Full Profile ’s group. Smith claims offers from Clemson, North Carolina, N.C. State, South Carolina, and Tennessee and it’s easy to see why. He has “the quicks” as we like to say, and I like the way he cuts.

Smith has an interesting history with Clemson – the Tigers have known about Smith since middle school when Scott recommended to Smith that he switch positions and focus on playing receiver. As a sophomore, Smith caught 35 passes for 535 yards and seven touchdowns. He also rushed for 201 yards and two scores on 12 carries.

Smith has long been thought to be a strong lean to South Carolina, but recent offers from Clemson and Tennessee and a visit to North Carolina’s Junior Day have opened up his recruiting. He also keeps in touch with former Union star and current Clemson student coach Roscoe Crosby.

Deshaun Watson on Heisman: "I should have won it back-to-back"
2021 Recruit Quick Search - 85 Recruits (71 Clemson Offers)
Post your comments!