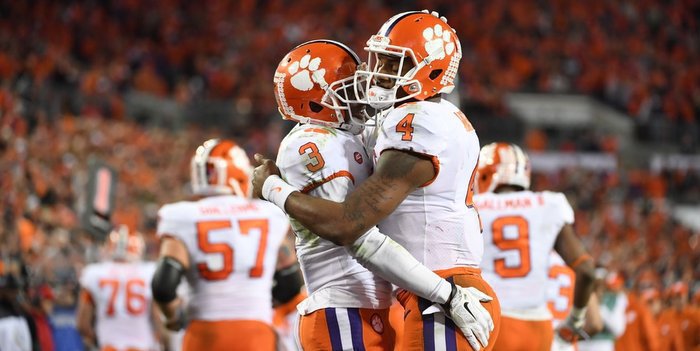 Happy Sunday everybody. It’s a day filled with football and basketball and plenty of things to cover, so let’s get started.

I’ll begin with basketball. Tonight’s home game against Virginia Tech is huge for Brad Brownell’s team. The Tigers got off to an awful start in non-conference play last season, but rebounded with solid wins in conference play. They still missed the postseason. The team fashioned an impressive non-conference resume this season, but has started off 1-5 in the ACC.

That conference record means the Tigers are looking up at every other ACC team in the standings except for Pittsburgh, which has a slightly better overall record. If you are one of those that thinks 20 wins is the magic number to earn an NCAA Tournament berth, they need to win nine games out of the next 12 in the regular season or maybe win seven out of 12 and then two in the ACC Tournament.

That’s going to be hard to do. They still have five games remaining on the road, and two game against a Florida St. team that looks like a Final Four team.

Despite Clemson's struggles to start ACC play, the Tigers are still in the top 40 of both the RPI and KenPom. Clemson has faced the nation's second-toughest schedule according to KenPom. Perhaps they can make some kind of run, and maybe the players-only meeting that was held after the blistering loss to Louisville (the coaches were banished from the locker room for 15 minutes) will have an effect.

It all starts Sunday, and even though I’ve been critical of the offense (they fall in love with the 3-pointer, and still sit next-to-last in the conference in 3-pt percentage) the problem has been with the defense and rebounding. The team sits next-to-last in rebounding in the league, can’t seem to stop the other team from grabbing offensive boards, and opponents are shooting at an incredibly-high clip.

Louisville shot 56.3 percent the other night and out-rebounded Clemson 45-25. Virginia shot 58 percent in beating Clemson in Littlejohn last Saturday. Georgia Tech shot 46.6 percent, and Notre Dame shot 46.7 percent. It’s hard to win when you can’t rebound and give up points in bunches.

If the Tigers are to have a turnaround and perhaps make a run at the postseason, it has to start with a win over Tech today. Another loss, and the road becomes almost impossible.

There hasn’t been a lot of movement on the search to replace defensive ends coach Marion Hobby. The coaches have been on the road recruiting, and like I’ve said before, I wouldn’t be surprised to see Swinney add Lemanski Hall to the staff and add a 10th coach when the new rules take effect in April. That would give Swinney the time to conduct a thorough search after the stress of National Signing Day, Elite Junior Day, and moving into the new Football Operations Center.

As for Chris Rumph: ESPN’s Brett McMurphy reported that Rumph turned down overtures to return to Clemson. Like I wrote last week, Rumph didn’t exactly leave on great terms after Clemson’s 6-7 season in 2010, and he’s been known to talk bad about Clemson on the recruiting trail.

I’m not saying it didn’t happen, but man, I find it highly unlikely at this point and the people who sit close to the situation have expressed the same thoughts.

Clemson had nine players selected in the NFL Draft a year ago, one shy of the record of 10 set in 1983. Could that number be tied this year?

That 1983 draft class was stocked with great players – Terry Kinard, Cliff Austin, Johnny Rembert and Chuck McSwain just to name a few. But in doing some research, I found a little nugget I thought was interesting.

Back in 1983, the NFL Draft went 12 rounds and teams could pick almost at will in the final rounds (almost like adding those five or six players to your fantasy roster that you know will never play). In the 1983 draft, five of those seven players were selected in the eighth round or higher (Andy Headen, 8th), Danny Triplett (11), Bob Mayberry (11), Brian Butcher (11) and Frank Magwood (12th).

What will the number be this season?

Deshaun Watson, Artavis Scott, Mike Williams, Wayne Gallman, Jordan Leggett, Jay Guillermo, Ben Boulware, Cordrea Tankersley, Jadar Johnson and Carlos Watkins all have a chance to have their name called in the draft. That’s ten, and if all ten are picked has to be more impressive than the 1983 numbers.