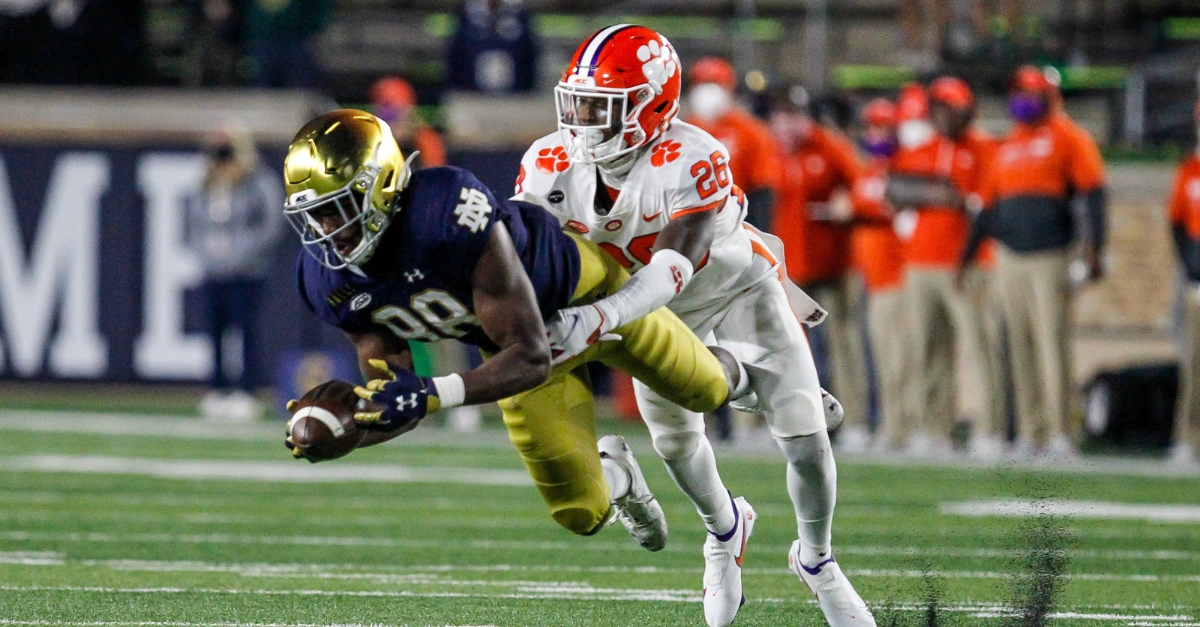 Although still favored by Vegas, Tiger fans knew Clemson going on the road to face a Top-4 opponent without QB Trevor Lawrence, DT Tyler Davis, LB James Skalski, and LB Mike Jones would be an extremely tall task. In the end, it was only slightly too much for Clemson. Several starters left with injuries during the game – including both safeties, a defensive lineman, a cornerback, and an offensive lineman – yet the Tigers pushed the Irish to double overtime. Losing is no fun, but the Tigers are well-positioned to earn a revenge game against the Irish in Charlotte on December 19th.

As we do each week, let’s dive into several key stats and discuss what they mean for Clemson.

While the focus of this article will be on the Tigers rather than the Irish, it is worth starting by giving credit to Notre Dame. QB Ian Book proved he can win the big game. He led a clutch game-tying drive to send the game into overtime and touchdowns drives in both overtime sessions. His athleticism is underrated. His ability to move outside the pocket and pick up yards on the ground made the difference late in the game.

Clemson was able to stuff the run against Boston College even without Tyler Davis and James Skalski, but against the championship-level rushing attack of Notre Dame, they could not. Kyren Williams was effective in putting the Irish in third-and-manageable situations. As a result, the Irish were 10/19 on third down. Overall, the Irish outgained Clemson 209 to 34 on the ground.

Clemson lost the battle of the trenches on both sides of the ball. They struggled to stop the run on defense and struggled even more to give Travis Etienne room to work on offense. It was exasperated by an injury to offensive guard Matt Bockhorst but was a glaring problem before that. Even in the two previous games, Tony Elliott was forced to be creative to get the ball to Etienne in different ways. Most of the struggles in this game can be tied back to injuries (and point to an epic ACC Championship revenge game), but Clemson’s inability to open rushing lanes for Etienne is a more enduring issue. The best running back in the history of the ACC was held to 28 rushing yards. They’ll hope to see this mended during the open date.

The most notable absence from the starting lineup was Lawrence, but it may not have been the most impactful because freshman DJ Uiagalelei played so well. Certainly, he isn’t as good as Lawrence yet, but the future is bright. He has excellent arm strength, good mobility, and makes smart decisions. He’ll likely enter next season as one of the top two QBs in the conference (along with UNC’s Sam Howell).

I don’t expect the playoff committee to penalize the Tigers too heavily for this loss (AP voters only dropped Clemson to 4). They’ll look at the context and see the Tigers on the road without Lawrence, Davis, Skalski, and Mike Jones. They’ll also see safeties Lannden Zanders and Nolan Turner, OG Matt Bockhorst, and DT Bryan Bresee leaving the game injured. The impact was fairly obvious. LB Trenton Simpson, a true freshman who was filling in for Mike Jones, missed some key tackles as just one example (he will be great, he’s just very young).

Despite all that, the Tigers took a legitimate Top-4 team into overtime on their home turf. Tiger fans should not be disappointed -- they should be proud the Tigers had that much fight. They just ran out of bodies and out of gas. Clemson can now get healthy during the open date and then will only have Florida State, Pittsburgh, and Virginia Tech in their way to earning an ACC Championship game berth and likely a rematch with Notre Dame. FSU just got blown out by Pittsburgh, which after the win is still only 4-4. Meanwhile, Virginia Tech lost to Liberty. Everything is still on the table for the Tigers.

Georgia quickly built a 14-0 lead over the Gators, but the Dawgs were outscored 44-14 the rest of the way. Georgia, like Clemson, was injury-depleted, but it feels like the Kirby Smart era may have peaked in 2017 when they were just a play away from winning the National Championship. They’re just a great QB away from competing at the highest level once again though. Florida now controls their own destiny but still has to go through Alabama in the SEC Championship game.

Aside from the Dawgs, the biggest losers in the playoff race may have been Texas A&M and Cincinnati. Both teams earned impressive wins, especially the Aggies’ absolutely trouncing (48-3) of the Gamecocks. Unfortunately for them, Notre Dame’s win puts the Irish in a position to take their playoff spot even if they lose to Clemson in an ACC Championship game rematch. As such, the Aggies and Bearcats will need to cheer for an upset of Notre Dame or Clemson before then.